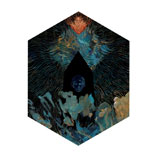 “I became, and the becoming became. I became by becoming the form of Khepra, god of transformations, who came into being in the First Time. Through me all transformations were enacted.”

To all of the doom bands who attempt to evoke a hazy, druggy vibe with their music with overt references to illicit substances, horror films and various other unspeakable activities, may I present you with the exquisite opium doom of Queen Elephantine’s masterpiece, Scarab. This is how you intoxicate your audience without force-feeding them played-out dopesick rhetoric and weed-puns. By some strange alchemy of simple elements, the Rhode Island band have struck upon drone gold on their fourth album, following on the heels of fellow trance masters like Om and Bong.

Formed in 2006 and having undergone several line-up changes, Queen Elephantine may be as well known for their own albums as they are for split releases with the likes of Elder, Sons of Otis, and with the UK’s own Alunah. But for this latest release core founding member Indrayudh Shome has assembled the strongest ensemble yet to deliver the band’s most focussed and inspired collection of ragas; deep, guttural bass, wily overdriven electric guitar, slide, droning tanpura and – best of all – two drumsets, all coming together to form a breathing, swaying entity to inhabit the listener with lulling rhythms and hypnotic insectoid drones.

The album’s evocative title is equalled by the music therein, and listening to these four songs, one can’t help but conjure up mental images of dusty catacombs, navigated by torch-light – the relief of everything illuminated by fire nulled by the threat of that which remains shrouded in darkness in such an ancient place. It is this sense of tension – building, and then being released – which makes Scarab such a compelling and hypnotic listen. The ebb and flow of murky notes (as in the intro of “Crone”) feel like the creeping steps of some unseen, malevolent force and the band seem to be delighting in creating this heavy atmosphere, relishing the notes that are being played as much as those that are not . This sense of claustrophobia and space, light and dark is reflected in some of the album’s few lyrics too: “the saints have been here/ But in bliss and not in shame/ Bathed in wine, and not in sand/ Glimmering, glistening, suffering.”

Unusually for a doom release, the band also avoids falling into any generic pentatonic scale or conventional groove, even for a minute. On Scarab, the sense of the unknown or otherness (at least to these Western ears) transcends even Om’s own masterpiece Advaitic Songs which at least implemented more recognisable Indian and Middle Eastern instrumentation and melodies. Instead Queen Elephantine remain locked in an unusual, Middle Eastern or Egyptian scale which adds to the mysterious, exotic appeal of the music.

Listening through some of Queen Elephantine’s previous releases, you can hear the band falling into the traps which often befall drone bands –trying to do too much or too little, over too long or short a period of time. Scarab proves to be the perfect storm of instrumentation, musicians and sensibilities; the vision is singular, and the results are spectacular. An air of mysticism hangs heavy over Scarab, each note carefully considered, as if filtered through the millenia to reach us with a now indecipherable message. Across these four tracks, Queen Elephantine weave a majestic, downtrodden, mystical form of drone doom unlike anything I have heard for a while. In short, Scarab is the sound of Om becoming ominous.