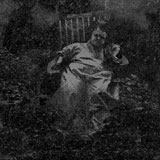 If there’s a band out there with a name more appropriate to their music than Primitive Man then I don’t even want to know about it. This Denver trio have somehow discovered amplification before bothering to get around to things like the wheel or agriculture and play a thoroughly unevolved brand of blackened, sludgy doom that sounds like being hit over the head with a bone club as a fat-streaked ur-shaman chants blood-curses right in your goddamn face. Everything about Empty Husk, their single, fifteen-minute track on this split, should really just be a litany of cliches – mono-riff bludgeoning, guitar-feedback wails between the occasional chord progressions, guttural vocals and the slow-section-suddenly-gets-blastbeaty bit – but it’s all put together with such a single-minded attention to primitivism that it combines into one seamless and horrible whole that makes the listener feel that they, somehow, have fallen down through time into the primordial swamps of the early Earth. If you don’t like ultra-heavy, unforgiving music or you look for riffs more than atmosphere, then this is never going to be for you but for those who like to crack right into the marrow of the matter then there’s no place better to be.

Northless, on the flip side of the split, plough a pretty similar furrow but the slightly more high-end, hardcore yelp that they employ is often more irritating than imposing and, whereas Primitive Man’s single track bucks and weaves through different layers, Northless’ three offerings become rapidly samey. On paper they should probably be the better band – using more structural interplay, a more modern production and a technical approach to riff – but it comes across as disjointed and pointlessly repetitive with none of the weight, the tar-like and cloying thickness, that Primitive Man bring to proceedings. I think they’d be a good band to catch live in some sweaty dive and there are certainly interesting ideas here, Wasted Breath’s menacing introduction being the most immediately obvious, but they’re not worked through to any lasting degree and quickly revert back to heard-it-before death-doom motifs, which makes any longevity the recorded work has minimal.

If Primitive Man are the shaggy hominids lurking in the darkest recesses of the human psyche then Northless are the animatronic museum-diorama models, repeating endless tasks behind protective glass.