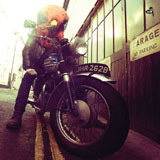 The old adage “never judge a book by it’s cover” could just as easily apply to albums, and yet the artwork for ‘Check ‘Em Before You Wreck ‘Em’, Admiral Sir Cloudesley Shovell’s second full length effort, seems to perfectly belie its musical content. The combination of denim and leather with a slick, black vintage motorbike suggest serious vintage rock’n’roll credentials, whilst the bizarre and surreal bird’s head embodies the best kind of progressive weirdness. In ‘Check ‘Em Before You Wreck ‘Em’, The band explore a realm beyond conventional verse/chorus structures and rock band clichés, bringing in progressive influences that almost harks back to the likes of Captain Beefheart or Frank Zappa, as well as some of the more experimental Deep Purple and early Black Sabbath. However, killer riffs on tracks like opener ‘Do It Now’, or the standout ‘Bulletproof’ prove Admiral Sir Cloudesley Shovell are still a big, groovy hard rock band at heart, and as such ‘Check ‘Em Before You Wreck ‘Em’ has an appropriately raw, natural feel, seemingly the antithesis to the modern trend of perfectly executed, quantized, autotuned and lifeless recordings.

The album is, at its heart, a 47-minute long riff fest, featuring stellar, semi-improvised guitar jams locking into Bonham-esque drum work by Bill Darlington. Above it all, frontman Johnny Gorilla’s throaty voice blares out anthemic, soulful hooks, part-Ozzy, part-Lemmy, on tracks like ‘Thicker The Better’, which is stuffed full of glorious AC/DC-innuendo. However, it’s not an especially original or groundbreaking sound, and much of this album definitely falls within a well-ploughed vein of rock music that the band will have to share with countless other modern 70s revivalists.

Despite this, Admiral Sir Cloudesley Shovell is definitely one of the more distinctive bands in the genre, experimenting with unusual structures and ideas on tracks like ‘Running From Home’, which, despite some killer grungy vocal harmonies and lively riffs, feels slightly disjointed. This slight awkwardness is magnified in closer ‘Late Night Mornings’, which, despite having some great, psychedelic ideas, feels like three very distinct and half-formed songs have been somewhat carelessly squeezed into one track. Similarly, whilst the speedy, schizophrenic riffery of ‘Don’t Hear It… Fear It!” blasts along at a pleasingly breakneck pace, the less melodic vocals on the track grate slightly with the aesthetic of the rest of the album. However, it is the nature of more experimental ideas to polarise opinion and alienate some listeners, and to Admiral Sir Cloudesley Shovell’s credit, there are also several moments of stellar progressive songwriting in ‘Check ‘Em Before You Wreck ‘Em’, such as spacey 8-minute epic ‘Captain Merryweather’.

‘Check ‘Em Before You Wreck ‘Em’ manages to combine a very familiar, rock’n’roll feel with a slight progressive edge, making for an album which genuinely does stand out from the crowd in a genre packed with soundalikes. The album does have its problems, but despite this, it’s a great listen, and proof that there’s definitely potential for Admiral Sir Cloudesley Shovell to grow into a truly fantastic band with subsequent releases.