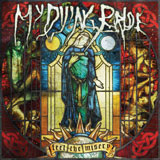 Fans of My Dying Bride know what to expect – with nearly 25 years of consistently stellar material, it’s reasonable to think that their latest epic dirge, Feel The Misery would easily meet expectations if not outright exceed them; they’ve rewritten the history of melancholia and the tortured human condition with the perfect fusion of doom, death, goth and gravitas – every decade with its subjective artistic pinnacle – 2001’s The Dreadful Hours, 1995’s The Angel And The Dark River; even the slick metal-synth experimentation of 1998’s 34.788%…Complete (an underrated and unfairly criticized album and the last to feature the now newly returned guitarist Calvin Robertshaw) retained the band’s trademark sound and timeless aesthetic. The group’s latest outing is not a reinvention of the wheel per se, but another step in refining the perfect soundtrack to mankind’s inherent destructive tendencies – obsession, the cruelties of passion, and the agonal journey towards eventual death and liberation; a soundtrack that longstanding members Aaron Stainthorpe (vocals) and Andrew Craighan (guitars) have been aiming for since the band’s inception.

That Robertshaw is featured on this record is somewhat symbolic in the cyclical evolution of the band—2012’s A Map Of All Our Failures saw a return to the stripped, lean and raw appeal of earlier 90s releases; Feel The Misery, although glistening with a bit more studio polish, continues this ‘return to the roots’ theme, capturing elements of some of the group’s best records. A Thorn of Wisdom recalls the more progressive writing style from 2004’s Songs Of Darkness, Words Of Light – the track builds on dual piano/synth melodies with a cool galloping rhythm section; Stainthorpe provides a clean croon, layered for texture and ambience – it’s a pleasant surprise of a song; forward thinking without losing My Dying Bride’s quintessential identity. I Almost Loved You is a wonderfully crafted melodic piece, percussionless and again relying on powerful piano/synth melodies to carry its building momentum – at its core, it has much in common with For My Fallen Angel (from 1996’s Like Gods Of The Sun); without the latter’s orchestral arrangements, the song assumes a less overtly dramatic tone, honing in on the introspection of grief and loss.

But the band soothes and slays with equal proficiency, boasting some serious riffing muscle on opener And My Father Left Forever and To Shiver In Empty Halls – the latter is an impressive track in its scope alone; it’s a journey bolstered with NWOBHM swagger, atonal arpeggio licks, and sobering melodic doom; the brilliance here evident in its seamless flow, despite the track’s intrinsic stylistic variability. But this is the real triumph of My Dying Bride circa 2015 – they have achieved mastery of their craft by remaining true to their most authentic self. And to the group’s credit, creative integrity has always been the priority making their art just as relevant today as it was two decades ago. The “Pallbearers” of this generation owe a great deal to the originators – tracks like A Cold New Curse, easily the standout here, reminds us all how the best progressive melodic doom should be written. But in the end, comparisons probably mean little to a band whose singularity provides an artistic vacuum for their expression. And as long as suffering mars each respective generation, My Dying Bride will always have a bottomless reservoir for output. 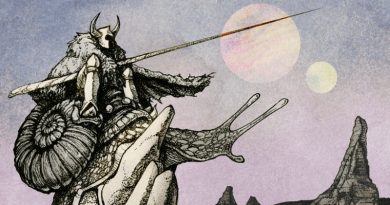