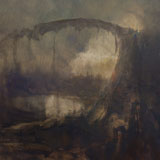 Chasms is the new album from Lycus and it is as deep and as dark as it sounds! This beautifully depressing piece of art was created by a four piece doom collective from Oakland, California. Clocking in at around forty-five minutes, Chasms certainly holds your attention to keep you sucked down to the bottom of the dark pit of sorrow that they’ve created. It’s easy to see why Relapse Records have invested in this.

The heavy tone and atmosphere of this record makes you think you’re listening to something from somewhere in Scandinavia, so I was actually shocked to learn that these four souls hail from California; a place known the world over for the Film Industry and Silicon Valley. This perked my interest as there is clearly something gloomy going on beneath surface and what Lycus have done with their second record is expose us to the darker side of their world. Therefore allowing us to explore and connect with it with some real avenue.

Chasms bursts into life with the song Solar Chamber.  Rolling and rampant drums signal the start of this dispiriting walkthrough, much like the onset of a panic attack. The heavy tones from Jackson Heath and Jonathan Nicosia’s guitars establish the atmosphere for the invasion on the listener’s aural senses. Walls close in around you and you can almost smell the dank air that it produces.

The guttural vocals are not my thing personally, but one must listen and appreciate the ability, technique and delivery of them across this record. They really add to ambiance and desolation that is been portrayed here. Fans of Ruins Of Beverast take note.

Things get a bit more interesting on the next track Chasms. A melodic intro leads us into the next stage of this foggy sombre. In parts I was hearing things that wouldn’t sound amiss on a down tuned Warning record. An element of heartbreak and harsh life experiences come to life from the lyrics and a haunting Cello outro by Jackie Perez Gratz complete this downtrodden tale, taking us to the half way point.

Mirage kicks off the second part of this record with a combination of thunderous drumming and melodic guitar picking, before meandering through to a heavy finish that sounds like the lovechild of Mourning Beloveth and Oranssi Pazuzu. The rhythm section of Chasms has benefited nicely from its production. Trevor DeSchryver and Bret Tardiff come together to lay the foundations in this dark pit of solemn and this is displayed nicely on this track, before leading us into the albums finale.

The final chapter, Obsidian Eyes, opens with a crushing and traditional doom intro drenched in feedback. It’s a song that bleeds emotion and almost reads as a lonely goodbye. The eerie cello break down in the middle of the track helps compound this, before leading us back to the albums big finish.

Rather this is an auditory suicide note, cry for help or simply a medium for venting bad moods through artistic expression, it certainly engages ones thought process and I believe Pablo Girardi captures this perfectly with his cover painting. Chasms is a powerful, mournful and melancholy piece of conceptual doom that not only looks fantastic on physical format, but will also stand up well in any doom metal collection.

I linger in lore of disgust…