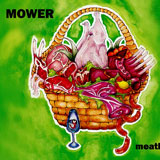 I learned three things from Mower‘s press release: they are from Wigan, their EP was released on January 30th, and that they are fat men making fat music. Far be it from me to confirm or deny their claims about their physiques, I can definitely agree that their music is pretty fat. If you want slamming guitars and plenty of angry but intelligible vocals, you’ve come to the right place. Mower make the kind of metal that you imagine to be played by bearded, beer guzzling and, well, big men.

The sound of Meathead is pretty solidly a band bordering those murky boundaries between stoner and sludge. It’s hard to state exactly how much of a difference there really is between those two genres, but it’s safe to say that to put Mower firmly in either camp is a disservice to them. They mix the aggressive vocal styles and thick guitars of sludge with stoner’s catchy, blues-inspired rhythm.

The opener, Tundra 64, is a good introduction to Mower‘s heavy, rolling groove. The drums feel like a metronome, played precisely on every beat, and with each fill coming in with mechanical exactness. This might sound like a criticism, but it allows the slower and slightly looser guitars, which hang back behind the beat at times, to sound even sludgier. Towards the second third of Tundra 64 the tempo kicks up a notch into a frenzy of fast drums, chugs and, as the things get slow again, filthy bellows. Mower‘s songwriting isn’t complex, but their movements keep things interesting and help them maintain the intensity.

Second track, Itchy Healing Skin, has a familiar opening which kind of highlights the unfortunate fact that when using genres as established as those in which Mower works, it’s pretty hard to be original. On the other hand, ‘crisp black suit, slicked back hair..’ are so evocative of ZZ Top’s classic Sharp Dressed Man that I’m pretty sure Mower know what they’re doing. If the similarity is deliberate, then it’s genius. The main hook of this song is so groovy that I’d happily listen to it on repeat all day.

Big Doris lurches into some nice, slow doom – fitting for a track that’s 9:15 long. Mower like to vary their style, while keeping it in the sludge/stoner/doom area. Basically, they are heavy. They don’t play too much with the formula: they keep the riffs groovy, the vocals aggressive and don’t use too many harmonies or complex passages. There is a DIY attitude that oozes from the record, and on Big Doris it’s most evident. The guitar work is familiar, using those big riffs that you played around with when you wanted to go loud in your room. But the difference here is that Mower give them complete legitimacy. You feel the energy in their recording, and the simplicity of the songs give Meathead brash, and head-banging, power. The closing track, Ursula, is a similar story; it’s a crushingly heavy, 9-minute doom jam. Meathead is no nonsense. It’s heavy shit, plain and simple.

The UK has a thriving doom metal scene right now, with bands like Greenhorn and Pist joining more established bands across the country. It’s safe to say that if not with this release, then soon Mower will cement their position in the UK doom scene and get the recognition they deserve – as variously fat men playing consistently fat music.