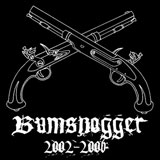 A greatest hits from a band that were a wilfully uncommercial event? A gathering of their material from their debut 5 track EP ‘…And Destroy All That Come Before Us’ (self-released under their own label, Ape Of Thoth Records, in June 2003), the split 7″ with Among The Missing was released in July 2005 on Calculon records and Withered Hand Records, and the 6 track EP ‘Alcohol & Swine’ released in 2006 on Calculon Records this marks the debut release from Witch Hunter records by paying tribute to one of Nottingham’s fondest remembered Sludge bands.

The band built their reputation on chaotic live shows and the ability to straddle a musical crossover by playing a delicious combination of stoner, doom, metal, punk and hardcore encompassing elements of Motorhead, Black Sabbath, Eyehategod and even home town heroes Iron Monkey.

In a scene that can often disappear up it’s own arse due to the serious nature and self referential hatred of well, lets face it, everything, Bumsnogger were a breath of fresh air from their ridiculous moniker to the comedic (albeit black comedy) nature of their songs. Titles like ‘Big In Germany (Still Shit)’ ‘How I Became The Town Slut’ scrape the surface of a band who saw themselves as duty bound to stick two fingers up at those who consider metal to have no room for fun and yet at the same time create genuinely catchy, likeable and insanely heavy music.

However those who dismiss the name and pay too much attention to the tongue in cheek nature of the band missed the trick at the time and should be loath to do so again given the opportunity this release presents. This is some seriously nasty music executed with a belief and a passion that belies the DIY Punk nature of the band, the first EP is impressively produced, giving the band a sound that captures and showcases their live energy propelling their uncompromising sound from the speakers and slapping you gleefully in the face with songs that are break neck sounding sludge that somehow remains a series of almost sing-a-long dance floor anthems.

Highlights come thick (pun intended) and (sometimes not-so) fast on this collection from the savage bark of opener ‘Dutch Fisting’ through ‘Demonizer’s beserker chorus, Bumsnogger don’t pull any punches in the delivery the twin vocal attack of vocalists John and Andy coming off like Iron Monkey giving Raging Speedhorn a kicking down a darkened crack alley. The fact that they never got to release a full length disc is a crying shame for the UK, yet alone Nottingham sludge scene and this twelve track compilation is as essential for long time fans of the band as it is for new comers as in the four years since their departure no one has come near to filling the hole their Charger meets Black Sabbath roar.

Unique in the quality of their sound and the strength of their song writing, unique in the fact they proved you didn’t have to be miserable to play metal or take yourself as seriously as Manowar, unique in the wilful irreverence of their humour – who else could write a song called ‘Murdering The Homeless’ whilst living in the UK capital of homelessness (at the time they wrote it) or the gleeful ‘Whitney’s Crack Den’. Bumsnogger had a silly name, didn’t take themselves seriously and probably shot themselves in the foot for doing so, but were fucking great.

Get yourself a copy – it’s a free download for crying out loud! – crack open a beer, bang your head and have a laugh and don’t take life so seriously… you know you want to really…