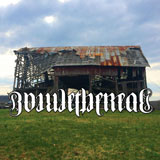 Back in 2003, Southern Lord released the debut seven inch by Richmond, Viginia-based Fancy Metal instrumentalists Loincloth, featuring the rhythm section of the almighty Confessor –  drum-octopus Steve Shelton and bassist Cary Rowells – guitarist and absolute sweetheart Tannon Penland and another guitarist named Pen Rollings, who was and is one of my all-time favourite musicians.  To say I was excited by that record – and their earlier demo that featured two extra tracks – would be an understatement.

After frying my mind with four shuddering, juddering slabs of delicious fancy instru-metal writhing with twisted labyrinthine guitar lines and reality-warping drum patterns they vanished, simply vanished…like an old oak table…..until 2011 when they suddenly resurfaced without warning with a full-length album, Iron Balls Of Steel, but minus Rollings.

There was neither hide nor musical hair to be heard of the man until suddenly the tail end of 2013 when he suddenly sprang forth from the void as one half of the duo Bowl Ethereal, purveyors of fancy metal of a similar hue to that of Loincloth, albeit a little tricksier-sounding, only this time he was playing drums – as he had done way back with mathrockers Ladyfinger – and a gentleman of the name Brian Metz was playing guitar and bass.

I freely admit that I was a little taken aback and disappointed to not have Rollings busting out those tasty licks and that fancy riffola, but, hey, Metz was gooooood and really I was just chuffed to have Rollings back making music again, full stop.

So, the first offering from Bowl Ethereal was initially a free-to-download five track demo/EP, with an additional track available if you emailed the band, but those canny folks at Southern Lord have now wised up and seen fit to take a break from releasing generic crusty D-beat and midlife crisis hardcore reissues to make that demo, extra track included, available as a seven inch single. This may be the wisest move from that once-great label in quite some time.

Each track, including the extra, is one minute long, give or take one extra second on two of ’em, which may seem frugal but BOY do they pack a lot of musical information in there!

First track Twenty-Three Exciter Dreams serves as a blueprint for what is to follow – spiralling guitar lines ascend atop colossal rubbery, punchy notes and dramatic drum stabs, piling up into oddly lurching stacks of atonal chording across which percussive battery skitters, obeying some kind of logic that only the two men involved can hear. Snatches of twisted harmony erupt atop the violent spasming muted notes that announce the end. All done within one minute, repeat five more times in chopped and cut-up variation.

I fucking love it, but then I would, really. Shit like this is my bread and butter. Make it jarring, violent and technical as hell and count me in, throw in some off-kilter harmonies and I’m in Fancy Metal heaven.

Sure, it’s not for everyone, but you know, that’s their problem. Pen Rollings is back, Brian Metz has got his back and all is right with the world. Let’s just hope we don’t have to wait eight years for an album this time eh?