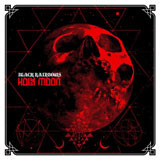 “Rock’s not new, son.” It’s something that every kid should be told. ‘Cause it seems to me that every twenty years or so, some band emerges, using a previously established sound to be obscure and original, when in truth they’re just playing make-believe. Black Rainbows have created nothing new here…but where most bands strive only to be Xeroxes of past endeavors, Holy Moon attains a rightful place of equality amongst the rock gods of old. Copy and paste? No! These guys got it right.

Many bands try to recapture a dead/dying sound and fail miserably. It’s great that they’re trying, but what most bands churn out just doesn’t sound right, like they’re playing pretend…. I think rock music is the new blues: you have to feel it in your blood, in your bones, for it to work, for it to sound just right. Monster Magnet was one of the last bands (that I can recall) from my library of music that had a music video played on MTV. And they were also one of the last bands—that I can think of—who could pull this sort of music off flawlessly.

I haven’t heard much of Black Rainbows as I write these words, but I’m quite sure they’ll fall into my steadily-expanding heap of music, surely to be revisited one day, that is for certain.

This band really knows how to weave songs together with one central up-and-down scaling riff—which the lead guitarist uses eagerly as an excuse to overlay his searing solos—that just sounds so tight and so groovy. You might find yourself shouting “YEAH!” from time to time as you listen. If, like me, you’re listening it by yourself in a quiet apartment complex, you might find yourself looking around the room to make sure no one heard you, or saw the “amped-up” fist flying over your head, feeling dorky at your outburst—as if someone might have been watching. Maybe that’s just me and my issues of self-consciousness, anxiety, and (hopefully mild) paranoia?

The only gripe I can admit to when listening to Black Rainbows is that each song off their record sounds somewhat similar. Not so much that it seems like laziness, but enough so that it can become repetitive. If you’re like me, you tend to play albums through from start to finish; especially when listening to an album you’ve just purchased. Though, I can’t really say that this is any fault of the band by any means. Perhaps their sound is just so solidly theirs that they can’t help themselves? Besides, the same can be said about most classic rock bands out there. I don’t know too many people who can listen to AC/DC, for example, for more than 20 minutes at a time, do you? After about song three, I’m done. However, if you happen to BE one of those people (who just can’t get enough), well, give this band a shot. You may find a new addiction. Hey, where there’s room for one, there’s room for two, no? Just keep in mind that Black Rainbows writes longer songs than you might be used to; the self-indulgence of stoner-rock seems to be strong with this one.

In closing, I have to say that, though this band is very, very, straight forward with what they have to offer, Black Rainbows might have been a big success back when rock n’ roll was the main genre in United States (and the world). Sadly, however, the torch has been handed (or stolen, rather) by rappers, pop artists, country singers and song writers, R&B jerkoffs, Dance airheads, and those god-awful posers who willfully destroy classic music like that old lady who recently thought she could restore Fresco’s Jesus painting; if they can get their grubby little fingers on it (and one day, they will), they’ll chop it up, add a stuttering effect, and call it “Dubstep.”

Maybe that’s what I scraped off my shoe earlier…