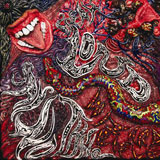 What would you expect from a band with a name like Wizard Rifle? Bong-drenched stoner riffs? Crusty doom? Prog, even? Well, this Oregon duo are here to show you all these things and more, but in a crazed, alien invader kind of way. And they do not come in peace. Aw hell, no.

So, the first words I made it to upon trying to conjure a review for ‘Speak Loud, Say Nothing’ were “utterly batshit mental”. In fact, I spent a good couple of hours searching in vain to find the means capable of summing up Wizard Rifle’s anarchic Frankenstein of razor-sharp riffs and genre references.

Opener ‘Tears Won’t Soften Steel’ is a clear statement of intent: sonically diverse, driven by hairpin riffs and unpredictable turns that recall early Mastodon and some of Torche’s melodic fervour. Sam Ford and Max Dameron make their instruments scream like mercy-crying virgins clearly not used to this sort of irreverent treatment, shredding and chugging and twisting with glee like a pair of desperate psychopaths mistakenly let out of the asylum.

‘Frazetta’ is as jagged, whacky and wild as the name suggests, while ‘Megatherium’ begins mournfully with a clean lead, unfolding with increasing venom, before suddenly dropping into a doom riff and then somehow taking on a jaunty swagger, with vocals reminiscent of a strangely chipper version of Layne Stayley.

‘Nobody’ is noisy and angular for a pleasantly frantic five minutes, before slowing to a halt and shifting into an exultant chant that oddly reminded me of the American Midwest (and Mike Patton’s Tomahawk project).

‘Leathery Gentlemen’ is the most extended number, kicking in with punk vocals hollered over a mash of whiplash-inducing switchblade riffage, and journeying through more caustic, unpredictable passageways than a carnival funhouse on fire. Not content with simply rampaging through the listener’s psyche for ten minutes, towards its conclusion the track segues into another surprisingly atmospheric, pastoral guitar interlude, before initiating a final firestorm panic attack of distortion and drum-skins to signal the record’s completion.

As mentioned, Wizard Rifle tip their hats to a huge range of rock past and present (even Cardiacs seemed to rear their grizzled heads). They play like they’re assembling the pieces of a maniacal sonic puzzle, only rather than selecting carefully, they grab at anything in view and hammer it into place whether it bloody well fits or not. And this approach actually works incredibly well – the duo manage to emerge with a record that sounds just as original and fresh as it does familiar. ‘Speak Loud, Say Nothing’ is continually interesting, often humorous and if nothing else, a massive amount of fun to listen to. 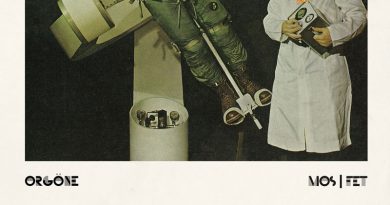