The evolution of underground heavy music over the last two-plus decades has been an endlessly fascinating journey.  Some of the original underground stoner, desert and doom bands preferred to keep it simple, fuzzy and heavy, Fu Manchu comes to mind, while others pushed the genre further, going more progressive, more psychedelic, contacting, and expanding. Early practitioners of this style like Kyuss, and later ISIS pushed the boundaries, influencing countless bands to the point that ‘stoner prog’ is almost a genre unto itself. I’d include bands like Elder, Elephant Tree, and the much-hyped King Buffalo, who are at the vanguard of this musical approach and it’s certainly not surprising to hear other bands running parallel sonically.

While not a new band, as the members have been playing together for two decades but releasing their self-titled debut in 2020 Los Angeles Vitskär Süden most certainly fall into this sonic realm. Their second album, The Faceless King, is an epic, psychedelic, trippy, meandering, at-times-heavy, mid-tempo aural journey.

The Faceless King slowly unfolds with The Way – Part 1, a slow-burn featuring plenty of volume squalls, and tripped-out effects, that flows right into The Way Part – 2 which instantly boasts some tasty guitar tone from guitarists Julian Goldberger and TJ Webber. However, I found bassist/vocalist Martin Garner’svocals mildly off-putting to my ears. Not sure if it’s his repetition or delivery, but he reminded me a lot of King Buffalo’s Sean McVay, and I found myself wanting to groove on his bass lines, with the aforementioned riffage of Goldberger and Webber, more than hearing him sing on these two tracks.

Archdiocese Of Worms possesses a killer bassline from Garner, and all sorts of dualling riff/lead action from Goldberg and Webber, as the song moves along heavy, yet melancholic, building, with an airy, expanse of instrumentation, and as the song comes to a close, Garner changes his delivery a bit, momentarily erasing any McVay comparisons. Voices From Beyond takes its time getting going, and right away, Garmer’s back with his McVay-esque, melodic delivery, but man, his bass tone is great. Voices From Beyond is a melancholic slow build, conjuring up plenty of feels, and again boasting some excellent guitar interplay from Goldberger and Webber.

a sprawling sonic journey that envelopes the listener…

Shepherds On The Roadside features some trippy, psychedelic meanderings, and some stellar instrumentation, again with Garner’srumbling, fuzzy bass, and I should at this point also heap some praise on drummer Christopher Martin as his crashes, rolls, and fills are all well timed throughout the entirety of The Faceless King, thus allowing his bandmates to really expand on their instrumentation. Bonedust And Dark serves almost as an interlude but boasts more of Garner’scrushing bass, and Goldberger and Webber’sstellar riffage and interplay. Again, tonally, all four musicians sound fantastic.

The Faceless King ends with the massive The Broken Crown, a crawling, melancholic, slow-burn that once again allows all four musicians to stretch their legs as Garner and Martin really hold down the groove and ride it all the way into the end. To say The Faceless King is an epic, heavy/prog album would be an understatement. It’s a sprawling sonic journey that envelopes the listener to the point that when absorbing the album on headphones, it can be difficult to discern where one song ends, and another begins, as the sequencing and album flow is sublime. And, as I mentioned, all four musicians really excel in their respective roles.

However, there were points where Garner’svocals were unwelcomed to my ears, sounding almost out of tune in some places, and just like Sean McVay in others. As well, as killer, well executed and performed as these songs are, to say nothing of the cohesive narrative running throughout, the tempo barely changed over the album. The big build-ups never had the anticipated payoffs.

As always, music is subjective, and undoubtedly there will be music fans who find this album amazing, and I’m sure some writers will have it on their year-end lists. Additionally, I can’t say enough about the execution, performance and tone, but the few negatives I experienced will keep me from elevating The Faceless King to the upper echelons of some of the mountains of killer records dropped this year. I will say though, Ripple Music most certainly has another killer band to add to their already stacked roster. 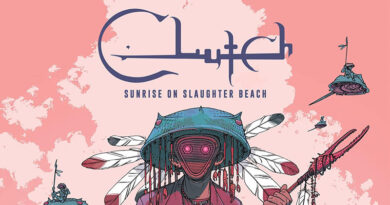