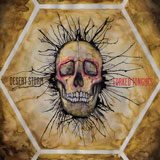 Sometimes you can watch a band live and they blow you away. They just have it…presence, a great sound, a great attitude, plenty of killer riffs, a great groove…etc. Desert Storm have that. In fact Desert Storm show so much potential that they need a whole fleet of Eddie Stobbart trucks to carry it around in. But how does this relate to their debut self released album?

Well, it’s always brave for such a young band to stick their necks out and release a full album at such an early stage in their career following a sole EP release, and to put it out themselves with the care and attention Desert Storm have done shows balls of steel and no little amount of confidence. On the face of it this is actually a great album. The Digipak packaging is an impressive and professional move and stick this little baby into your player and you’re hit by a tidal wave of fantastic riffs, strong, well constructed songs, great playing and an impressive level of dynamics that give the album an ebb and flow that pulls you in on the more mellow moments and pins you against the wall with thee mighty power of the riff when it all kicks off. That Desert Storm are capable of writing some truly great songs is without a doubt…and that really is half the battle. Some bands take years to develop this skill but these guys have that knack straight from the off and in vocalist Matt Ryan they truly have a secret weapon. Ryan’s gutsy roar comes across like the pissed up lovechild of Neil Fallon and Tom Waits being woken from his drunken slumber. His delivery is brim, full of power and conviction yet he shows that he is no mere one trick pony on the more gentle passages where he tempers the beast to produce a rich and heartfelt croon.

Also on a positive note, the production is nice and thick. The guitars deliver a solid wall of crunch with bite and clarity, underpinned by a rich bass tone and the bass drum has more punch than Mike Tyson on a drink bender and threatens to make your sphincter pop out with each well placed hit. The snare, it has to be said is a little on the feeble side and does detract at some points from the guts of the recording but hey, not every band can afford 6 months in Abbey Road can they!

Now, this is a very good album but I will admit to having a minor niggle…and when you consider the quality of the song writing and the performances, it is a minor niggle. All bands are a product of their influences, without influences no-one would ever pick up an instrument to learn and music would never progress and evolve but some bands, particularly in the early stages of their careers (and some right the way through), are very obviously a product of their influences. Desert Storm pretty much wear their hearts on their sleeves when it comes to their tastes and this informs their output strongly. The opening one two blast of “Cosmic Drips” and “Ol’ Town” are packed with juicy grooves and mighty riff goodness but it has to be said they are merely a step away from being Clutch out takes. “South We Roll” and “Smokes and Liquor” preach from the Orange Goblin bible of stomp but deliver some fine, heads down boogie crunch nonetheless. Elsewhere “Forked Tongues” dusts off the first couple of Trouble albums for a lesson in doom dynamics albeit with Ryan’s crazed, drunken hobo vocal skills. Desert Storm are standing at a crossroads, one way heads down the route of replicating their influences and the other down the road to reinterpret their influences…with the song writing and playing skills they have in spades they look set to walk purposefully down the latter route. Let’s not forget that The Rolling Stones’ first two albums were almost entirely covers and their career didn’t suffer, also Airbourne are riding high on releasing the best two AC/DC albums in 25 years. At the end of the day great songs are great songs and that is what will carry Desert Storm forward to bigger and better things…plus they are a fucking great live band!!!! 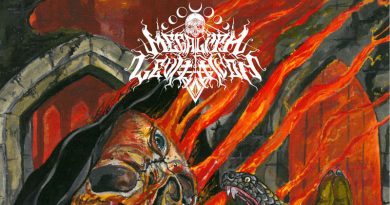