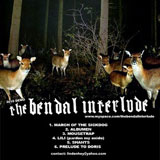 “Stoner-thrash” is probably an over-used term. After all, how often is it that you actually hear the tumbleweed imagery and the lethargic song structures of the desert-scene colliding with the scything riffery and spit-in-your-face vocal assault of thrash metal? However, in this particular instance, The Bendal Interlude have absolutely nailed this description, then handcuffed it to the bedposts, slapped their business card on its chest and stomped out of the room.

In absolute terms, this is all about riffs. Huge, brilliantly executed, stonking riffs. It’s Riff City. Riffadelphia. Riffolutionary. Riff ‘n Chips. If this collection of riffs were a soup, it would be a broth – thick, heavy, murky, beefy and with bones swimming in its depths. It’s somewhere between the tightened grooves of early Clutch and the satisfactory crunch of modern Testament, yet it DOES all fit around that stoner-metal template and even finds time to meander through passages of experimentation and even, to a lesser extent, classic prog rock. In drawing on similar past experiences, a mob like Saviours would be another good comparison – good-solid song-writing, with the drums slightly off the beat, and a gallop to the rhythms which rarely lets up.

Opener ‘March of the Sickdog’ kicks off with some solid chugging and finely-polished rolling drum fills, topped off with distant ghostly vocals before slowing into a Kyussian passage of lazy oodling and funky solos, finally slapping you back into that water-tight groove. ‘Albumen’ is rougher on the vocals and more brutal on the strings, with a savage demolition behind the drums. ‘Mousetrap’ goes deeper still into guttural, near death-metal abomination, but maintains a worthy punch to the verses and includes some passages of spacey fret-board histrionics. ‘Lili (Pardon My Oxide)’ strays into COC/Eyehategod sludge; still heavy, but with trawling drums and bass lying thickly under the chunky axe-work. ‘Shants’ cracks out some crazy-ass distortion to add a waa-waa creaminess to the crunchy riff biscuits. ‘Prelude to Doris’ is a final stroll through the cactus-littered outskirts of town, with the metal edge slowly and subtlety giving way to a slow drug-riddled haze, peacefully closing with the sound of crickets in the evening.

Whilst the song-writing is slick and the musicianship formidable, I do feel that some corners may have been cut here with the production at times. The vocals do on occasion sound like a bit of a last-minute, one-take addition, and although the guitar-tones are intended to be muddy, they could afford to be slightly cleaner to make the punch of the riff ever more memorable. Big players on the scene like Electric Wizard, Fu Manchu and even Eyehategod have recently proved that it is possible to record brilliantly fuzzy orgasms of guitar, yet with a crisp and smooth finish and The Bendal Interlude shouldn’t be afraid to compromise when it comes to the quality of their mix.

Nonetheless, this EP stands them in good stead to put their wood into the faces into metal fans the country over. There is a burgeoning sludge scene currently developing in the UK and The Bendal Interlude will no doubt soon be rumbling many an underground jungle with rackets as face-spanking as this.