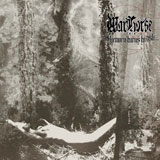 As Heaven Turns to Ash… is one of those records that you read about, a record that casts a long shadow over doom itself, but yet can never find to hear. I’d never heard the record itself until now, but I’ve read much about its legacy, and its rarity also seems to have added more mystique to the release. Southern Lord has rereleased this iconic record, complete with the 7” single ‘I Am Dying’, on vinyl and digital formats as of the 23rd of February.

As Heaven Turns to Ash… opens with the brooding melancholy of Dusk, before the riffs collapse in on themselves like a dying star during the cataclysmic Doom’s Bride. Waves of downtuned guitar slam into you, grabbing your arm and dragging you inexorably into the void. Warhorse are devastating here. The riffs grind against each other, much like icebergs on a frozen sea. Moments of calm come through a soft bassline that only ramps up the intensity. Doom’s Bride is nine minutes of textbook doom crush, and explains instantly why this band and this record is so revered. Everything any doom band has written since 2001 has some kind of influence from As Heaven Turns to Ash…

What I like most about this record is that slightly unearthly rumble that permeates each track. If such a sound existed, it would be the sound of planets moving. Black Acid Prophecy has dashes of psychedelica woven within it, along with one of the heaviest steamroller grooves you’ll ever experience. Amber Vial provides us with a short break, a brief dose of psychedelic soothing before Every Flower Dies No Matter the Thorns (Wither) plants its slow burning riff seeds and lets them grow. It oozes a very Neurosian vibe, even though it’s probably the other way around. For me, that is who this record reminds me of the most.

Each track contains many trademarks of a classic doom record, from the almost bluesy opening stomp of Lysergic Communion to bottom heavy, tar thick grooves and even moments of howling feedback. As Heaven Turns to Ash… truly is the masterclass in doom that everyone always said it was. Find a better pure doom song than the titanic Scrape and I’ll eat my proverbial headgear.

Warhorse’s final release, the 7” single I Am Dying, has also received the rerelease treatment, and is two tracks of heavy as fuck, righteous groove laden skullcrushers.

As Heaven Turns to Ash… is, simply put, as staggeringly essential as everyone says it is. Riffs a mile wide, a style that you can see aped by so many bands within doom and further afield, and the overall feeling of a classic record. It’s got blues, groove, low end, and anything else a doom fan could ever want!