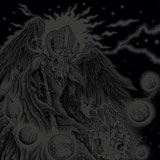 I’ve been a fan of Bradford’s bleakest, Lazarus Blackstar, ever since stumbling upon their debut album ‘Revelations’ many years back. Their maniacal fusion of sludge and noise on that release absolutely sickened me, since at the time I hadn’t even heard EyeHateGod or Unsane yet, and I guess you could say that Lazarus Blackstar were one of my gateways into the uglier side of heavy music. It’s been with great interest that I’ve followed them from their earlier material with Paul Catten’s demented howl, through to last year’s excellent ‘Hymns For The Cursed’ with new vocalist Mik Hell’s fearsome growls.

When they released a split 12″ with Glasgow’s Headless Kross earlier this year, featuring guest vocals from none other than Alicia Morgan (of NYC legends 13), they really established themselves as one of Britain’s foulest exponents of gut-churning doom.

This latest slab of filth, a split 12″ with Mannheim’s Black Shape Of Nexus via Alerta Antifascista Records, will hopefully turn more people on to both of these excellent bands, and have the current crop of weak UK ‘doom’ bands cowering behind their Dopesmoker reissues. I’m looking at you, Black Bong Goat Witch Whateverthefuck.

Black Shape Of Nexus begin their side with the monumental ‘Honor Found In Delay‘, a not-so-subtle nod to Neurosis, who are obviously a big influence here. The slow build of the riff is soon joined by vocalist Malte Seidel’s hoarse bellow, which coincidentally reminds me in some places of former Blackstar vocalist Paul Catten. Around the halfway point of the track, things switch up to an ominous, bass-heavy rumble, strains of feedback weaving throughout. There’s not much in the way of variation, but the sheer propulsive power of the track is perhaps their sole intention. Who needs variety when you’ve got sheer driving force?

Their second contribution, ‘Always And Only‘, is another sterling example of bass-led riffage, Stefan Kuhn’s prowling groove locking the whole thing down. For a band with 6 members, they all sound remarkably focused on creating a solid, unified rhythm, instead of veering off indulging each member’s individual whims. Though I’ve never made it to Mannheim, I have spent a lot of time in industrial Germany, and BSON really do produce a fitting soundtrack to the endless sprawl of purely practical architecture, miles and miles of red brick and steelworks… their sound is as lean and effective as German engineering itself.

Lazarus Blackstar open with ‘Command And Control‘, the guitars of Lee Baines and Izak Gloom possessing a slightly more mournful edge than usual, and Mik Hell’s growl even lower and more demented than ever. This track is probably the most out-and-out ‘doom’ thing they’ve recorded so far, it has that perfect degree of despair set to a sound heavier than the weight of 6ft of grave dirt on a casket lid.

Closing out their side with ‘Whispering Through Broken Teeth‘, a track just as nasty and unpleasant as its title, which doesn’t so much have riffs as it has audio maelstroms, sucking you down into the murky depths below. Again they eschew the sludgier, more noise-oriented material of their beginnings, in favour of a tar-black strain of doom, even incorporating the sound of a mellotron, and chanted, semi-clean vocals. If this stylistic shift is more than just idle experimentation, and further material in this vein is handled as excellently as it is here, I’m so goddamn excited to hear more from them in the coming year. Here’s to hopelessness.