Some sounds just hit my ear right. I’ve gobbled up atmospheric sludge, or post-metal if you’re gonna be lame about it, like it’s about to expire for years and it might be my favorite music genre. Neurosis, Isis, Cult of Luna, and Rosetta are the undisputed godfathers of this sound and laid the foundation for the younger bands to follow.

THÅRN are looking to carve a name for themselves at any cost. Formed immediately before the pandemic struck time to a standstill, they bravely decided to march forward. We have Jérôme Barré on vocals and guitar, Luke Booth on bass and vocals, and for this recording, Gary Marsden on drums. Their debut I was released in 2020 and consisted of two songs that definitely showed promise, but lacked the precision of debut Collision. It’s obviously still worth checking out as it lays the foundation of what brings us here today.

Kicking things off The Way sounds like a fight between musician and instrument. It’s slow but dynamic and has a meandering charm dripping from it. Barré’s and Booth’s desperate lyrics compete with not-so-empty threats saturated with emotional turmoil as their strings limp forward ceaselessly, while Marsden’s drums are beaten so hard it’s a wonder his arm is still connected.

Freezing cold Replacements glides through structures fluidly. It’s hypnotic and enchants the world I create in my head where sludge and hate stretch my emotions towards something heavenly. Shrieked vocals that never go breathless, nothing here is held back, like an abstract artist who doesn’t notice the deep red they’ve been splattering the canvas with is blood. Looking back and wondering where that began and where could it end, vocals retreat to a near whisper that never feel out-of-place and lull me into a vague sense of security that begins to distort. I’m on the edge of my mind as the chasms the guitars have built have no beginning, middle, or end and begin tittering. This music, drenched in the soul of each creator, greets me with an embrace that feels familiar, yet unknown.

melted tones clashing with tribal warfare like drums, and vocals that are layered with rust…

The aptly named Mute builds and builds for what feels like forever. Imagine walking down an alley blindfolded until your sight is mistakenly regained and an awe-inspiring vision floods over you. Tribal Shadow Of Another begins with a droning guitar and steady drums that erupt into a dizzying sonic terror. All the instruments seem to go against each other with a growing intensity, feeling like it’s chasing you down a hallway that narrows with each passing step. The noises go claustrophobic and are desperately skittering until everything turns into pure feedback.

I guess I’m gushing again over this sound. I seriously don’t know what it is about melted tones clashing with tribal warfare like drums, and vocals that are layered with rust. This is catharsis. This is abysmal. And this is where I’ve chosen to pour all my negativity into. 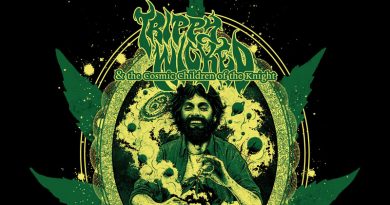