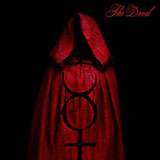 Well, this is something a little bit different, isn’t it? The Devil is a classical, symphony-centred heavy metal project and has created its debut album with the intention of shopping it around for use as a film or live play score. Enshrouded in secrecy and sporting elaborate masks and costumes (Ghost, anyone?), The Devil are a London-based entity who harness the power of keyboard atmospherics, audio samples and brooding instrumental riffage to build the backdrop to jeepy-creepy stage-shows and horror flicks. In addition, the band has already contributed to a couple of upcoming low-budget movies and are actively seeking further opportunities to add their metallic bombast to other, more visual projects.

Listening to ‘The Devil’ with no further media stimuli displays both its individual merits and isolationist faults at the same time. Despite having no vocalist or live vocals at all, the group’s songs do have themes which are voiced over cleverly with narrative samples. ‘World of Sorrow’ deals with the chaotic scenes directly after the 9/11 terrorist attacks on the World Trade Centre, whilst ‘Devil and Mankind’ and ‘Extinction Level Event’ approach politics around the American military and the cold war era of atomic weaponry respectively with real-life audio clips. The uplifting ‘Intervention’ plays out Martin Luther King’s ‘I Have a Dream’ speech, backed by skyward spiralling string arrangements and some apparent calm amongst an otherwise heavier guitar storm. It’s unclear for the most part whether The Devil themselves actually have a stance on any of these major world issues as all vocal aspects are the recordings of others. It’s also possible that the sample monologues themselves are either purely stylistic or indeed that The Devil is a commentary on the evil threat of man to its own kind and to the planet; hence pitching our very own race as the devil on earth in the process. If all of that is all too deep and meaningful of course, then the album serves as a simple history lesson with added power chords.

Musically however, and as I mentioned with no film accompaniment, the album is for the most part a major disappointment. Every riff is numbingly simple, half-baked and would see even fans of late-90s Megadeth and shite-era KoRn feel a little short-changed. Keys, strings and synths are at the forefront of The Devil’s sound, blending with the metallic chords to form a Nightwish-meets-Type-O-Negative sensuality, rather than a Trans-Siberian Orchestra feast of shred, exciting musicality. Whilst this all sounds incredibly critical, I feel that it’s incorrect to be treating, and indeed reviewing, this collection of tracks simply as an album by a band, when something additional and huge is clearly missing i.e. the visual ideas behind the songs.

With lead-off track ‘Diviorium’ and ‘Extinction Level Event’ already having been selected to feature in two upcoming movies (‘The Fury’, due early 2013 and ‘E.S.P.’, due late 2012, respectively), it’s hard to argue that The Devil haven’t achieved their goal of producing moody, doom-scented atmospherics as a cinematic accompaniment. However, listened to in isolation, this self-titled debut is just too simple a concept and carries very little dynamic edge in a world where world-class doomery exists right at our fingertips. The concept of the band/project I can grasp, just about, but to release this as an album without its celluloid safety net is a difficult move to understand.

‘The Devil’ is an slightly unnerving and unusual soundtrack, or at best, un-scary gothic background music, but if you’re looking for the heaviest sounds of 2012, or a different anonymous entity to rival Ghost, please look further afield.