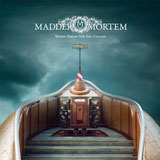 Hmmmm…..bit of an odd one, this. A five-track EP from female-fronted Norwegian Alternative Metallers Madder Mortem containing four new tracks, one ‘single’ version of lead track ‘Where Dream and Day Collide’ and a video for that self-same track.

For those of you who may be unfamiliar with Madder Mortem, I will first say that musically this release is in no way like anything else thus far covered on The Sleeping Shaman, so those of you who ONLY want to hear Doom, Sludge and Stoner Rock had best stop reading. You won’t like it. Trust me.

If I were going to liken the music on this EP to anyone, it would be to a jazz-inflected, less histrionic Evanescence minus the hip-hop influence….or possibly a female-fronted gothic jazz version of latter-day Faith No More. D’you see what I mean? Not the usual ‘eavy beardy-weirdy music we get ’round these here parts, and certainly not something one would expect to see coming from the Peaceville stable, of all places!! The label that brought us Autopsy, Paradise Lost and Axegrinder?!

BUT! Lest ye think this is a bad review, THINK AGAIN!! On the contrary, I am very impressed with this EP. Only having heard of Madder Mortem in name alone , I was unsure of what to expect from them – having visions of some kind of vaguely gothic Norwegian metal with a touch of Death or Black Metal, judging by their name and photographic evidence – vocalist Agnete M. Kirkevaag is certainly no flouncing gothic ice-queen ala Amy Lee or That Woman From Nightwish, but rather a ballsy, versatile frontwoman who doesn’t seem to want to sell Madder Mortem on her image alone – THAT certainly earns my respect – and her bandmates definitely make all the right noises.

Lead track, ‘Where Dream and Day Collide’ moves from a pulsing, hypnotic bass driven opening, with sedate, shimmering guitar and very low-key vocals into a jagged, lead-heavy climax full of screeching, whirring guitar, hammered cymbals and powerful vocals. The ‘single’ version is simply a shorter, tighter version. ‘Jitterheart’ is a schizophrenic bunny-hop through balls-out Rockabilly Metal, into Deftones/Tool-esque rhythmic tension and heavy-ass psychedelic grinding sludge that ends in atonal guitar and beautiful clustering harmony vocals. ‘The Purest Strain’ is a slightly more straightforward but still quite odd mix of metallically delivered jazz/swing, and ‘Quietude’ is just that – a contemplative, shimmering little number boasting some very beautiful vocals from Agnete that serves to cleanse the palette after being jitterbugged around the room by Meshuggah, as it were.

Mention must also be made of the included video for ‘Where Dream and Day Collide’ – a steampunk/anime-esque animation with a touch of Gorillaz to it. VERY nicely done, and an excellent accompaniment to the track. As I said earlier, this isn’t for everyone, but if you like what you’ve read, it’s definitely worth a listen. Just don’t expect any beards.