There is always a whiff of expectation when you see certain names attached to new records. The fact that Chris Fielding of Conan fame recorded and mixed it, and that James Plotkin of too many cool projects to mention mastered the thing, shows that at the very least APF Records feel that Sound Of Origin are worthy of investment.

Sound Of Origin are from Huddersfield, and if you’re one of those people that needs a genre to hang your hat on then let’s say ‘stoner rock’. However, the best thing about Sound Of Origin’s debut album The All Seeing Eye, is that it’s a far more interesting ride than just tagging it as ‘stoner’ would suggest. For any record in this genre to elevate itself above the ever-increasing hordes it has to rely on one of three things; a new riff-tape delivered by god himself, the discovery of a new musical note, or a new ingredient added to the recipe that makes the riffs, and sounds that we all know and love, taste and smell just that bit different to everyone else.

Sound Of Origin have gone for the latter option – the new ingredient – and this takes the form of new(ish) vocalist, Joel Bulsara. His vocals have been compared to Layne Staley; and in the past that’s a comparison which has only ever led to disappointment for me. After all, we’re talking about one of the greatest voices of a generation. But in Bulsara’s case I didn’t find myself disappointed, and it’s because whilst his melodic vocals do resemble Staley’s, this is just one of so many vocal techniques and voices that he uses, and it’s this vocal delivery that sets the record apart from so many others that you’ll hear this year. His vocals cover everything from grunge and classic heavy metal all the way to blackened sludge, with a short passage of what I can only describe as Mongolian throat singing thrown in for good measure…and it all works, and the band have taken this vocal dexterity as a challenge and provided a group of songs and riffs that are equally as strong and diverse.

The record opens with the instrumental track Not Dead Yet. It’s three minutes of doom that wouldn’t be out of place introducing a Candlemass album. This is swiftly followed by an almost industrial drum intro which drops us into the huge riff of the title track. This is the kind of riff that fans of the likes of Trouble will immediately rise to. It has that quality that makes you want to pick up the nearest guitar and learn it immediately!  The production gives real weight to this and every other song on The All Seeing Eye, and the drum sound deserves a special mention. Bulsara’s vocal on this track is relatively restrained, almost as though the sequencing of the album is drip-feeding us with different elements of his sound as we go along. Third track, Lockjaw, is where he really opens his wings. Cleanly sung verses, barked refrains, and a vocal hook in the chorus that takes so much confidence to pull-off. It’s three minutes and twenty-three seconds of energy that demands your attention with riffs that wouldn’t be out of place opening up a Torche record.

Dim Carcosa’s slow tribal drumming changes the pace and the whole vibe of the track ups the heaviness stakes considerably – a stake that is matched, with the added touch of bluesy guitar and the previously mentioned throat singing, by the track Morning Bird. If I had to pick a track to illustrate all that’s good about it, I think this is it. Morning Bird best demonstrates the trick that Sound Of Origin have pulled off; they’ve managed to add all of these sounds and influences to songs that are as heavy as a bag of very heavy spanners, yet it’s a mainstream-friendly record. I don’t use the term ‘mainstream’ in an even slightly derogatory or elitist way. What we have here is a potential gateway drug to the sort of madness that The Sleeping Shaman readers live and breathe. It’s that rare animal that’s heavy and inventive enough to keep the hardcore happy, whilst also having enough hooks to interest someone that would usually rather run a bare-footed marathon than be exposed to your record collection.

Stoned Messiah Blues (incidentally, surely this could have been the title of the first Down album?!) shows Bulsara at his most Staley-esque. If you can imagine a bluesy and sludgey version of Love Hate Love from the first Alice In Chains album, then you won’t be far away from the sounds of this track. It also has echoes of Solace, who do extended bluesy heaviness just about as well as anyone out there, and have done for years.

Voices Left Behind then takes us back to the accessibility of Lockjaw. Its four minutes that acts as a musical palate cleanser before launching into the final two tracks. Into The Vile and Tempest Dunes are a combined sixteen and a half minute lesson in how to leave you pummelled into your seat, or pinned to the back wall of a venue. Into The Vile probably sticks closest to the stoner template – slow and bluesy riffs and an oppressive melody that beats you into submission. After the cascade of ideas and sounds in the previous eight songs, the energy drops, and the final track Tempest Dunes buries us in sound (or maybe sand…) – and it’s a great way to go out.

The All Seeing Eye is sequenced brilliantly – it takes you on a real journey, revealing elements of the band’s armoury as each song goes by. It’s a record that deserves to take Sound Of Origin onto bigger stages, and if they pull off this hugely impressive sound on those stages, then their all seeing eye may well be focusing on a much larger audience very soon. 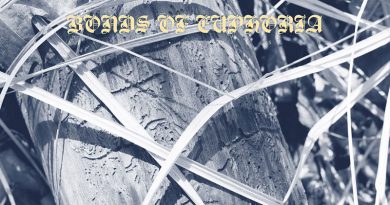