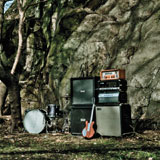 You barely have time to register the humming, swirling buzz of the Hammond organ that opens  this, Swedish behemoths Switchblade’s sixth self-titled LP, before they are upon you. Sky-scraping, monolithic guitars and the crack of drums that have the heft and swing of a mastodon’s ballsack suddenly fill the air around you. There is no escape, you will be crushed under the weight of a thousand gravities.

It’s been a long three years since 2009’s dark masterpiece and in that time empires have crumbled, lesser bands have come and gone and Switchblade themselves have become a duo. Shedding a bassist back in 2010, the band are now pared back to just drummer Tim Bertilsson and guitarist Johan Folkesson, with Folkesson taking care of the low end via a guitar signal split into a towering array of guitar and bass amps. As the band’s maxim states – Less Is Still More.

For this recording, the duo have taken a very organic approach to their overall sound – something mirrored in the cover art, a simple shot of the band’s equipment set up in front of a rock-face, surrounded by trees, grass and leaves – paring their already minimalist style right down on the one hand, whilst expanding their sonic palette via the integration of another instrument and differing vocalists on the other. In the words of the band themselves, they have “…tak(en) one big step forward and two steps backward.”

Joining Bertilsson and Folkesson on this recording are Per Wiberg (Ex-of Opeth and Spiritual Beggars, amongst others) on Hammond organ – an unusual choice of instrument for a band so known for their angular coldness, you may (incorrectly) think – and vocalists The Cuckoo (of Terra Tenebrosa), Lord Seth (AKA Jonas Renkse of old Katatonia) and David Johansson (of Kongh and The Eternal Void), along with occasional contributions from Bertilsson.

Ostensibly split into three ‘movements’ which ebb and flow into one another, creating what is essentially one thirty-seven-minute recording, Switchblade is a darkly sprawling, densely packed monster that still manages to let some light escape through cracks in its carapace as the band allow the music to ‘breathe’ via gulfs of hanging skeletal guitar, much as on the previous album (albeit more organic in tone, not as cold and brittle sounding as before). When the band lock into full swing, however, the sound is so thick and full that one could leave teethmarks in it.

‘Movement I’ fades in via Wiberg’s thrumming, sinister Hammond, almost instantly overshadowed by a colossally lumbering groove from Folkesson and Bertilsson that, as I stated earlier, swings like the scrotum of an enormous shaggy beast. After some time pounding this monster rhythm out, Bertilsson and Wiberg recede, leaving Folkesson hanging alone in space. The guitarist carves angular patterns in the dead air alone before being re-joined by drums, organ and the demented whispering and howling of Terra Tenebrosa’s The Cuckoo as Switchblade lock into another hypnotic groove section. Think Sleep, circa Jerusalem, playing Krautrock through a filter of molasses and you’ll have some idea of how hard it swings. Wiberg’s Hammond growls, buzzes and swirls around Folkesson’s tightly reined-in guitar line, driven by Bertilsson’s powerful, focused percussive thwack and embroidered by the slightly buried lunacy of The Cuckoo, vocals layered up just on the edge of hearing for the most part.

‘Movement I’ has barely receded into darkness when ‘Movement II’ kicks in with a brooding, slow-burning riff that flirts with discord before swaggering into some heavy slow-mo prog moves. Wiberg’s Hammond really adds bite here, harshly skirling around the guitar and prowling like some lithe, spiky creature. Wiberg and Bertilsson drop out again momentarily, allowing Folkesson to paint those discordant chords in the air once more, but soon pile drive back in accompanied by the dry, throaty growl of Lord Seth (AKA Jonas Renkse) in one of the most aggressively-paced moments of the album. Sure, the band hardly break a sweat as far as BPM goes, but the intent and vigour is venomous in the extreme as weight piles upon weight, driven forward inexorably until breaking point is reached and the sound opens out once again. The harshness of Lord Seth is replaced by the honeyed croon of David Johansson for this final section of the movement, adding a lighter textural feel to proceedings, although Wiberg’s fizzing Hammond goes a long way toward adding a paranoiac edge.

The Khanate feel of the last album briefly resurfaces at the beginning of ‘Movement III’ before being swept away in a stomping assault that lurches into a groove that sounds for all the world like classic Celtic Frost at half-speed, Lord Seth death-rattling above it whilst The Cuckoo circles once more on the periphery whispering and insinuating. As the track progresses, Switchblade’s ‘Less Is Still More’ maxim comes firmly into play with everything grinding down into cyclopean blocks of guitar and drums, spaced apart and driven into the ground as though from a great height. Wiberg, Lord Seth and The Cuckoo add texture to the granite tower-like sound constructions of Bertilsson and Folkesson whilst allowing focus to remain on the central duo.

Last time around, you may remember I pondered exactly how Switchblade could possibly top their 2009 album, if indeed they could. Well I’m happy to say that this recording just about knocks their last into a cocked hat with ease and aplomb, and that I was a fool to doubt them.

They may have taken a couple of steps back, in as far as losing a bassist and having to refine their sound further in light of this, but in doing so it has allowed the remaining duo to make a light-year leap forward in how to actually approach and deploy their sound and how to integrate outside sounds into it without losing their essential identity.

Listening to Switchblade it’s clear that for Folkesson and Bertilsson the future is wide open and the world of sound is well and truly their oyster. They can count on me to ride with them for the duration and follow them wherever they steer themselves next, which, on this evidence, could be anywhere. 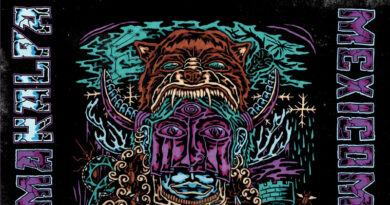