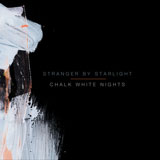 Stranger By Starlight (SxS) is a project in a duo format, an American one to be more precise. On one side you have Anthony Saggers, recognized for his stellar work in things like Stray Ghost, White Lace or even Tender Prey. On the other side you have one of the most honest and compelling artists in the “business”, a guy that is known by the HIGHLY underrated band that is Oxbow. Eugene S. Robinson, ladies and gentlemen.

The press release for this debut album, ‘Chalk White Nights’, described the project in the following way: “Stranger by Starlight is a product of insoluble emotional difficulty and fragile beauty [that] languished until the discerning gents at Bad Paintings actually realized that dharma gates are endless and they too found some sort of sympathetic resonance to what we made and what it sounded like and what it actually was.”

An impressive and accurate description of a thing that, actually, was it not supposed to be described, since in the end even a mere scientologist (OK, maybe I’m giving too much credit to these kind of people) can perceive that we’re looking to a piece that’s capable to shut down the world. Time stands still. Closed eyes give a better sight. That shit can’t be properly explained.

There’s a weird sense of progression… I guess it’s like any good trip. We are surrounded with a mix of ambient jazz and submersing environments that will eventually suffer a kind of weird evolution, in an always present film noir vibe. Going from the opening ‘The Night Of No Sleep’ where Saggers imposes repetition (you’ll see its one of the keys for the final result) to create an environment that is, at the same time, suffocating and liberator – it’s probably the brilliant aspect of this record. He can work in a non-duality way, where you would think that it was supposed to exist duality – to a more easy going (yeah, right) and open ‘A Black Cat’, where Mr. Robinson (“We’d like to know a little bit about you for our files”) goes from the more desperate and melancholic approach to a more assertive and “aggressive” mode .

But let me talk to you about this little daredevil, named ‘The Last Days Of The Sinner’. These two are still laughing. Who can blame them? Basically it’s a gigantic piece where teasing and hence sexuality is shown without any shame. The duo feeds the listener with hints that lead to a pathetic expectation to give, in the end, a big fat laugh. He couldn’t take his attention since he had to have his expected explosion. Mission accomplished. The explosion never happened… At least not in the expected way. There’s something really sexual about this. It’s a game. It just happens that you’re not a player in this game. YES!!!

‘Chalk White Nights’ will endure through time. Maybe not in the expected way (by now you would know that expectations are for suckers), but will endure. Honest, melancholic, human, sexual, unforgiving and a true challenge by nature. One of the most brilliant records of these past years.