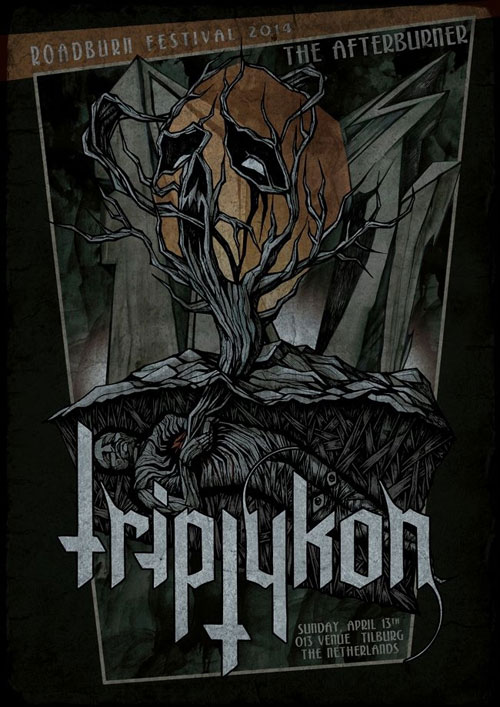 Walter & Co are extremely honoured to report that Triptykon will return to Roadburn Festival on Sunday, April 13th at the 013 venue in Tilburg, The Netherlands.

There’s a significant bond between Roadburn and Triptykon founder Tom Gabriel Warrior (already legendary for his work as a founding member of Hellhammer and Celtic Frost). Not only did he curate the 2010 Roadburn Festival, personally inviting the lineup for his highly acclaimed ‘Only Death Is Real event,’ Triptykon also played their first official live show at the festival in support of their then newly-released debut album, Eparistera Daimones.

The stunningly dark and deeply personal Eparistera Daimones showed an inspirational rebirth for Tom Gabriel Warrior after the riotous days of Celtic Frost, and placed Triptykon squarely in the vanguard of avant-garde metal. Many stunning shows followed, but Roadburn is proud to have brought them to the stage for that very special first performance. Their return to Roadburn will herald the release of their long-awaited new full-length album.

Roadburn are very proud about their continued collaboration with Tom Gabriel Warrior and Triptykon, and can’t wait to welcome them at the 2014 festival. Coming heavily armed with crushing new material, the band is sure to plunge Roadburn back into a dark abyss of all-consuming heaviness.

Tom Gabriel Warrior: “Roadburn is very likely the most extraordinary, daring, and vigorous festival in what has otherwise largely become a blandly repetitive and overly commercialized heavy rock scene. Moreover, anybody who has ever attended Roadburn can confirm that no other festival exudes such a unique feeling of radiance and creativity among audience and performers alike. Triptykon’s return to Roadburn in 2014 signifies yet another truly unique chapter in a long affiliation with the festival, dating back to the riotous days of Celtic Frost. I am deeply grateful to Roadburn’s artistic director Walter Hoeijmakers for his extraordinary friendship and his continued faith in the path we are pursuing with Triptykon. In return, we shall duly transform Roadburn into a church of darkness.”