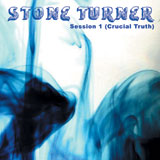 There are some talented fuckers out there!!! Jack Dickinson has been kicking around the scene for some time and never seems to get the breaks. After playing in a couple of ill fated bands in Cornwall he relocated to London and formed the heavy, psych blues power trio Stubb who, in their short time together produced a well received demo and played several highly regarded gigs…then the drummer left and they struggled to replace him. From the ashes comes Stone Turner. Originally intended as a free form collective with a revolving door of musicians this seems to have over time become the wayward “Son of Stubb” featuring Jack on guitar and vocals, Stubb bassist Isa and the world’s most cultured maniac Rich on drums.

Sound wise this does kind of pick up from where Stubb left off…big assed riffs over rolling drums with a glut of tasty Hendrix inspired leads…but this is far more freeform and spontaneous in feel as you would expect from a band that is trying to bring the jamming element of the 60’s and 70’s back to modern rock music. Opening track “Pagan Woman” kicks off with a cheeky sliding blues riff before the drums and bass fire up to create a huge oppressive groove. Vocally this may take a couple of spins to get your head around as a heavily reverbed bark erupts from the speakers. Listen carefully though and you can hear the insane spirit of Captain Beefheart on some kind of bizarre astral trip infusing proceedings. Track two, “Druid’s Finger” was apparently made up in the studio and as the title suggests this is touched with magic as the hypnotic spiralling riff snakes from the speakers with more lead frenzy and more Beefheart inspired vocal lunacy. Things kick up a notch on third tune “Electric Satan” as Stone Turner hit the kind of gasoline groove that Fu Manchu have made a good living from. This track is a little less wayward than the opening two numbers, a little more structured and the vocals are more restrained but the change in pace and delivery works to keep you listening and interested. In reality there isn’t a riff on this whole release that most guitarists won’t be kicking themselves for not thinking of…and for a band just jamming ideas that’s pretty impressive. Final track “Negative War” is a total 360 turnaround from the rest of this demo as Stone Turner abandon the hippy ideal and aim for the throat with a bludgeoning blast of barely contained hardcore punk. Think Discharge meets Black Flag meets Minor Threat in a mental institution and you’re half way there!!!

Only a band of truly accomplished musicians could hold together these jams without them degenerating into noise and chaos. Jack’s guitar playing, although borrowing heavily from the blues rock masters of the 60’s and 70’s displays a sense of abandon and dexterity that is exhilarating…often teetering on the edge of breakdown but always pulling it back. For a bassist/guitarist (check out Koresh folks!!!) Rich is the prefect drummer for Stone Turner. His ADHD style seems him flit from rhythm to rhythm like an amnesiac Ginger Baker without ever losing the groove and the drive to keep the songs pushing forward. With such schizophrenic mania erupting left right and centre in the drums and guitars, bassist Isa underpins the whole thing with a rock solid groove that ensures that the hazy structures maintain a grounding and coherence. The production may not be the clearest but for a release recorded live in the rehearsal room the overall sound just seems to work. A clear polished production would just strip the soul and heart from these jams, this needs to sound like a band hitting a groove in a room together and succeeds with all the weight and intensity that you can expect to see from these guys live.

A release for this is imminent and will be accompanied by a suitably psychedelic DVD of the band in the recording process. Tune in, turn on and fucking buy it!!!