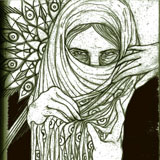 More than just a mere split LP, this release is more of a collaboration between Stevie Floyd and Aerial Ruin, with each artist appearing sporadically throughout each other’s sides of the split.

If you’ve only heard Floyd’s work in doom duo Dark Castle, the sounds contained within this release may totally perplex you, but if you’ve been paying attention to her other projects Natur, Spirit Ritual and Taurus, you will hear a natural progression from these more abstract recordings here. Though her output is decreasingly anchored in traditional sounds and structures, it all maintains a similar atmosphere and thematic concept; explorations of spirituality and awareness. She continues to defy easy categorisation even within the all-encompassing ‘experimental’ label.

I am almost entirely unfamiliar with Aerial Ruin, the solo project of Erik Moggridge, except for his contribution to the track “Rows (Of Endless Waves)” by fellow Portlanders Bell Witch, where his vocals provide a melodic counterpoint to that duo’s devastating doom. His soaring voice on that track’s climax damn near moved me to tears, so I’m eager to hear his contribution to this collaboration.

Within the opening seconds of ‘Where The Shadow Stands’ I already fall for the lush, haunting folk of Aerial Ruin. A more subdued proposition than what I had expected based on my limited exposure to Moggridge’s work, it captures me nonetheless, his spectral, echoing voice reminding me of the eeriest neofolk, sans all the bells and whistles (literally). ‘November’ continues down the same dark path, the driving rhythm of the acoustic guitar accompanied perfectly by Moggridge’s folky lilt.

‘Less Than Decay’ is the first of many tracks which sees the two combine forces, and showcases Stevie’s clean singing voice beautifully. Ever since hearing the clean sung passages on Dark Castle’s cover of Led Zeppelin’s ‘No Quarter’, I’ve always wanted to hear her explore this side of her vocals further. It’s almost unrecognisable from the earth-shaking roars or haunting wails she usually employs, and sounds just as natural. When she shows up again on ‘Ascending’, first harmonising with Moggridge’s vocal lines before lending her famous banshee wails as the last of the intricate fingerpicked guitar draws to a close. Aerial Ruin’s side of the split ends with ‘The Only Road’, a plaintive track which betrays its gloomy tone with an underlying hopefulness.

As the first strains of synth creep in to the ‘You Scathed The Sun’, the opening track of Stevie Floyd’s portion of the split, it’s clear this isn’t going to be remotely similar to what has gone before it. The colossal rumbling, pulsating sound in the distance is soon joined by Floyd’s trademark use of unusual scales that give the track a vaguely Middle Eastern, post-apocalyptic vibe. You’re right, that does sound weird. When her ethereal voice joins the fray, it’s difficult to know where to focus your attention, the vocal line not quite fitting when heard over the jagged guitar, and the nightmarish soundscape still present in the background only serves to unsettle. It’s unlike anything I’ve ever heard before.

When the chiming guitar and moaning drones of ‘Failure’ begin, it sounds much more cohesive, the disparate elements meshing well together. Floyd is joined on this track by Moggridge, their voices intertwining with some of Floyd’s wordless shrieks and moans heard far in the background of the mix. ‘Wrest In Natur’ should be pretty self-explanatory, but in case it isn’t, this track features Jef Whitehead of Lurker Of Chalice/Leviathan infamy. The track unfurls slowly, subtly building layer upon layer of various vocals, from the warbling of the main vocal, to the more distant haunting sounds, all underpinned by the otherworldly rumbling of Whitehead’s contribution.

‘Disappear’ features some, somewhat, misplaced sounding percussion, which distracts from the ebb and flow of the vocal layers, but it doesn’t last long before it’s removed from the mix. The weird, wavering mantra that appears later in the song is also slightly jarring on first listen, but does fit the overall mystical atmosphere of this side of the split. When it twists into ‘Ungod Reappear’, the initial impression I got from the first track of this side has been replaced by an understanding of these different tracks, not so much as individual songs, but as constituent movements of a whole work.

The final track of the album, ‘This Has Gone’, featuring an almost imperceptible contribution from Moggridge, is a relatively sparse offering, just one continuously droning note with intertwining voices ringing clear atop it.

The stripped-down dark folk of Aerial Ruin is a stark contrast to the layered sound collages of Stevie Floyd, and it’s hard to hear any common ground they might have musically, but what unites them is the honesty, the catharsis that each contribution so clearly provides. Despite the discrepancy between the two recordings, it’s undeniable that these two artists, in the truest sense of the word, have come together to create one of the most unusual, varied and heartfelt collaborations you will hear this year.

A real labour of love, this self-released album is available directly from each artist’s bandcamp, with handcrafted artwork and packaging by Floyd.