I’m pretty damn sure that, at this stage of the game, I don’t need to tell you who Karma To Burn are and how much they ROCK, right? If you don’t know that by now then there really is no hope for you.

Now, as for the Sons Of Alpha Centauri, well, introductions may need to be made, unless you remember their split CD with Will Mecum of Karma To Burn’s other band Treasure Cat? If you’re lucky enough to recall it – it was reviewed RIGHT HERE, by my good self back in the mists of time (29th of September 2009 to be exact) – then you’ll know that these cats rock extremely competently in a psychedelic desert-space-rock fashion.

Of course, if you don’t know what I’m talking about, Sons Of Alpha Centauri are an instrumental progressive stoner-rock band from li’l ole England, as opposed to Karma To Burn who, as we ALL know, are a monstrous rip-roarin’ instrumental stoner-rock trio from West Virginia, US of A….and when they met, as they did on this here split seven inch single, it was MOIDER!

Some of you may be too old to get that reference, but I just don’t care.

What we get here, pressed onto a mighty thick slab o’ clear vinyl is one brand new track from the Sons Of Alpha Centauri and one re-recording of a classic track from Karma To Burn, all wrapped up in a tasty double-sided sleeve, meaning you can choose from either the Sons Kyuss-flavoured ‘wind-turbines-at-sea’ cover, OR, KTB’s ‘acid-fried apocalyptic goatman’ cover. The choice, as they say, is YOURS.

Musically, both bands are dining from the same trough and playing in the same fountain, just in different ways. Sons Of Alpha Centauri, with their track ‘Conspiracy Theory’, strike an ominous note on the opening before moving into a super-tight riff more than a little reminiscent of KTB, but with a spacier edge. This taut riffage moves into something a little more ‘metal’, with a chugging slow gallop, overlaid with wailing police sirens, and a collage of spoken samples concerning the ‘military-industrial complex’, the new world order and suchlike. Tense and dramatic, this track is a little more aggressive than those Sons Of Alpha Centauri tracks I’d heard before, which is no bad thing.

Karma To Burn, on their side, hit us up with a re-recording of their barnstorming classic ’14’, or ‘Patty Hearst’s Closet Mantra’ as it was known on their debut album. A tense, moody number with a vaguely tribal intro, great dynamics and a great sense of space, even shorn of vocals it still kicks serious ass, as one would expect from the masters of instrumental riff-rock.

So there you have it. Two bands, seemingly separated at birth, with many miles of ocean between ’em, yet still co-existing on vinyl, in harmony and bringing the rock with aplomb. Fair brings a tear to the eye…. 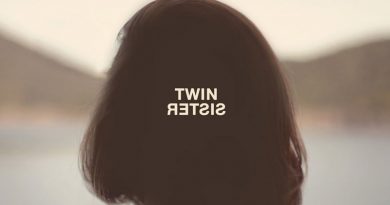