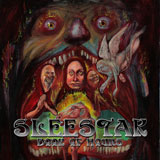 Back in 2011 Milwauke based psychedelic, stoner quartet Sleestak unleashed one of my favourite releases of the year with the epic and psychotropic ‘The Fall of Altrusia’ concept album. For the best part of an hour the band explored the looping rise and fall of the ancestors of the eponymous reptilian creatures from seventies TV show The Land of the Lost. For those familiar with the ‘Skylon Express’ album that preceded what is, in my opinion the pinnacle of their output to date, would appreciate the expansion of their obsession with the theme as they grew more ambitious not only in the concept, but in the musical delivery.

‘The Fall of Altrusia’ was not only incredibly ambitious in execution with terms of story, but a delicious collision of experimental folk and psychedelic progression with huge slabs of Doom and Sludge born from lengthy jams and crafted into something very unique and very special. To talk of this release with such reverence two years on shows the impact Sleestak made on their last outing.

‘Book Of Hours’ then comes with weighty expectation. Potentially named after a popular Christian manuscript of medieval devotion, this six track album is more of a stop gap piece for the band to take stock following the departure of guitarist Brian Gresser before they embark on their next considered, epic release.

On ‘The Fall of Altrusia’ Schmitz with fellow band members Marcus Bartell and Dan Bell took their art and refined to a point where everything was considered and ingeniously put together. On ‘Book of Hours’ the band feel more organic and loose in comparison, but with a sense of control and purpose that is more direct.

Unshackled from their previous thematic structures these tracks are more about the band cutting loose but are tied together in the debt they owe to the influence of sixties and seventies rock like Black Sabbath and The Doors rather than the heavy Doom flavour of their previous output. This departure could have proved to be a risk given the expectations of their fanbase and the opening intro ‘Appeasing The Gods’ does little to erase them with it’s almost industrial, lurking, sinister samples lending a grimy edge that grows heavier with each cymbal smash.

When ‘Seven Sorrows’ kicks in, the most noticeable thing is the speed of the track. Gone is the Doom plod, the trippy swirl of spacey psychedelics. This is replaced with a driving seventies, almost desert rock, with a swagger and a bombast that is almost reminiscent of the last Mastodon release. Over this blood and thunder vocalist Matt Schmitz commands proceedings like Jim Morrison if he had stopped the pretentious poetry trip and got back to rocking hard. The verdict? Did you really doubt that this band wouldn’t kick ass?

This is not to say that Sleestak have abandoned their philosophy completely. ‘5 Million Years To Earth’ still has spacey moments that drift in, adding light and shade to the more up tempo material and a heavy ending that recalls ‘The Fall of Altrusia’. Elsewhere on ‘Lone Wolf’ the band create a lazy retro feel with meandering solos, weird almost softly spoken vocals and a Doors like jazz diversion, showing that whilst they have decided on a more straight forward approach this time out, they were still not going to leave their experimental tendencies out completely.

On this release the band feel relaxed, crafting concept albums where every note has to tie in to not only the song, the theme, but the whole album can be a draining undertaking and here the band sound revitalised, kicking off their shoes and making themselves comfortable with the monstrously heavy ‘Blacklight Communion’ than comes on like Spirtual Beggars, Kyuss and Black Sabbath jamming in Monster Magnet’s practice room.

Not only have the band kept to their core talents of writing beautiful material, they have upped their game in terms of making an album that refuses to compromise on their ideals, but showing that behind the indulgence of their prog rock whims, these are three individuals who can combine to make seriously great rock music and it is a joy to hear.

The album also features a number of bonus tracks for the hardcore Sleestak army; an alternative version of ‘Lone Wolf’, demos of previous tracks ‘The Marshall Plan Reprise’, ‘Spherical Realms of Anstar’ and a live recording of a ‘Skylon Express Medley’.

In truth these extras are nice but a slight distraction at the same time. There is some variation in quality and interest to these tracks and it detracts from the album itself slightly, but it should in no way lessen the impact that ‘Book of Hours’ has, because for the duration of its running time Sleestak are simply incredible…again.