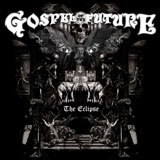 This record had me worried to begin with. Worried that the fractured, sinister and mysterious droning feedback of opener ‘The Eclipse Pt.1’ would continue for a further 35 minutes, without giving way to the indulgence of the mega-riffing culmination I had been waiting to salivate over like some kind of heavy metal Pavlov’s dog.

I need not have worried. Seven minutes later, this little know four-piece from the Czech Republic explode into a barrage of filthy churning sludge; an explosion of a band both dominant in their metallic assault yet also creative, original and well-educated in their writing. With a strong CV boasting support slots with the likes of Wolves in the Throne Room, Crowbar, A Storm of Light and Lair of the Minotaur, GOTF are not here to simply make up the numbers on the already talent-rich European scene, and have really hit the ground running with their sophomore effort.

Musically, the closest point of reference here has to be High On Fire, but the majority of ‘The Eclipse’ manages to harness a more primal, groove-thrash approach to the Matt-Pike-esque riff-trundling. At times the churning, chainsaw duel-guitar bludgeon brings forward evocations of ‘Arise’-era Sepultura or Celtic Frost at the peak of their dark powers. Adding in minimalistic werewolf-groan vocals of frontman Ultra and you’re probably conjuring up images of the blacker end of the metal spectrum, but both the riffs and crushingly pummelling rhythm section here DEMAND your attention from an act clearly well-rooted and versed in the arts of doom and sludge.

After the spooky, charred chords of the opening section of the title track, we are treated to a tribal drumming intro to ‘Children of Chaos’, before three guys and a girl hit the overdrive switch and crank out the first of many tombstone-heavy guitar riffs. The chaos continues at mid-pace for most of the album, occasionally breaking out into a gallop, but always crushing anything standing in the way of their languid onslaught. The sucker-punch for me comes with the punishing closing bars of the titanic ‘Witchbone Dust Overdose’ – a riff so heavy it could knock planets out of orbit, played over and over until your mind is about ready to implode. A bit like what Fu Manchu would sound like on a corpse-painted-themed bar crawl with At The Gates. The all-too-short record draws to a close with ‘Geniove’, a cover of fellow Czech black-metallers Master’s Hammer, and the concluding second instalment of the title track; swirling the listener away down a rabbit-hole of psychedelia.

I can’t stress enough how much I enjoyed this album, especially after beginning to appreciate the small intricacies and subtle modern stoner influences weaving into its shifting chasms of riffage. It’s very powerful stuff, and as I discovered on a couple of occasions, a near faultless ear-splitter to accompany one’s journey home after a shitty day at work! Based on this evidence only I would love to see Gospel of the Future jumping onto the European scene’s sludge-wagon and putting their aural boots into the faces of a wider audience hungry for sonic demolition.