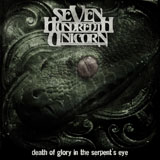 It’s a great feeling standing in a tiny pub on a cold November night with a small but dedicated bunch of strangers out to grab their fill of local underground heavy vibes when a support band hits the stage and blows the collective lot of you away. Last month I was at The Pomfret Arms in the shadow of a certain Danish lager’s brewery in Northampton waiting for some 4X-quality ear abuse from Corrupt Moral Altar when the unknown (to me) Midlands two-piece Seven Hundredth Unicorn opened up proceedings and achieved precisely this. Their gutsy, loud and intelligent maelstrom of riffs, throaty rasps and slick, gliding drum-work was enough to set me off on an immediate web-hunt for recorded material and as luck may have it, their debut EP ‘Death Of Glory In The Serpent’s Eye’ is free and easy for us all to get our mitts on and what a damn fine opening salvo it is too.

Based in Milton Keynes, guitarist/vocalist Dave Lyon and drummer/vocalist Matt Downes are busy chaps as current members of technical metallers The Atrocity Exhibit and Seethe, but somehow found time to forge this sludgy post-metal monolith in late 2012, with a sound that far outweighs their numbers. Named surely after that legendary lyric from Sabbath’s ‘Symptom Of The Universe’, the duo waste no time in showcasing a range of influences which takes in everyone from Torche to Cult of Luna to Baroness to the mighty Sabs themselves, whilst steering a constantly meandering path along the way for themselves.

The punky opening of ‘Johnny Shit Kicker’ perhaps doesn’t immediately best utilise Seven Hundredth Unicorn’s varied arsenal of tools. The jerky riffs and gruff, barked vocals at the track’s helm give way to some tight, neat drum patterns and more emotive guitar passages, evoking the likes of Russian Circles or mid-era Baroness. What’s cool about Seven Hundredth Unicorn’s approach is their lack of fear in pushing some frankly bitchin’ chug-a-thon riffs together with searing vocal melodies and delicate percussion play. When it comes down to it though, Lyon is more than willing to stamp down on his stompbox to force out some extra overdrive to power through into the final burst of hard rock glory.

After the sniggering lolz of ‘Jesus Was My Age When He Got Nailed’ title subsides, you’re left with a slab of prime Kylesa-esque metal from the gutter, backed by some of Lyon’s cleaner microphone conquests. The tone drops to a sombre slither as Neurosis-styled riffs are fired across the bow and Downes’ drum patterns become ever more complex, skilful and tightly woven. There’s an emotional energy to the vocals seldom heard in the vast majority of sludge tracks of the past 3-4 years since the likes of Floor roamed the lands with Lyon exhibiting a range of techniques and riffs that leave you little clue as to what to expect from around each corner. Ultimately, again the twosome aren’t afraid to rock out towards the song’s close, but it’s the “taaaaaaake hiiiiiiiim dowwwwwwwn” pleas that resonates long after the EP has finished playing as the chief moment of poignancy.

The closing title track is perhaps the pick of the bunch, beginning with some Isis-worshipping guitar noodles that quickly escalate through varied fills and bridges as Lyon and Downes trade vocals and compete healthily for the song’s leadership. A lot of the riffs and see-sawing rhythms sound familiar from a lot of the bands I’ve already name-dropped, but they’re a neat package together and Seven Hundredth Unicorn are clearly not a band who are afraid to fiddle around with arrangements, tempos, moods or structures in the slightest.

So the moral of the story, as always, is “go to gigs and ye shall find”. Seven Hundredth Unicorn aren’t totally unique, but they are a very commanding presence for a two-piece who’ve only been together for a year. Here’s to hoping they can find time amongst being in several other bands to push their thought-provoking, doomy envelope even further. Until then, head over to Bandcamp and grab the EP: at £0.00, it’s definitely a good value for money proposition.