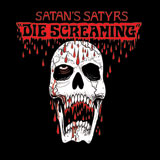 Amid the hoards of dusty vinyl junkies going positively batshit over the Blood Lusting arrival of Cambridgeshires mystikult rockers Uncle Acid and the Deadbeats back in 2011, precious few paid a great deal of attention to an equally evil triumvirate as they careered out of a plume of red smoke riding flaming chopper bikes at 66.6mph. Known as Satan’s Satyrs and proudly sporting their Blue Cheer, Witchfinder General and Death SS patches upon their youthful sleeves, it wasn’t long before the Virginian threesome’s grooving cacophonies had caught the ears of Electric Wizard’s Jus Osborn amongst others as their ‘Wild Beyond Belief’ debut began to make waves in the underground. Barely out of their teens, the blood-curdling racketeers headed swiftly for Roadburn and beyond; sacrificing goats and almost single-handedly resurrecting the VHS cassette from its car-boot-sale-shaped grave with their combination of Hammer Horror-themed vitriol and taut, righteous riffage. Now returning to cast us all back into their brooding and sadistic mould with a sophomore effort ‘Die Screaming’, the Satyrs have clearly graduated into the premier league of occultsploitation.

After the chunky Hammond-accompanied instrumental intro ‘Thumper’s Theme’, which sounds like Spiritual Beggars nailing a Dan Sartain cover, it’s time to put the pedal to the metal for a solid 45 minutes of blood-racing intensity. The smash-n-grab rifforamas exhibited on the likes of ‘Instruments Of Hellfire’ and ‘Lucifer Lives!’ are memorable, hooky and catchy enough to catapult ‘Die Screaming’ straight out of the speaker cones and into your brain for weeks on end. Bassist/vocalist Clayton Burgess’ lyrics ooze the sticky, metallic taste of congealed blood as his partners in crime, Jarrett Nettnin (guitars) and Stephen Fairfield (drums) lock into a groove thicker than triple cream. The previously-released single ‘Black Souls’ is a further highlight – the drums almost falling over themselves to reach a level of speed that can keep up with Nettnin’s screeching guitar work. There’s a thrashiness to the Satyr’s bombast that evokes the likes of Midnight or The Shrine alongside the barrelling authenticity of the likes of Budgie or Alice Cooper. The more you listen, the more fun it becomes and the faster you want to spin this disk.

‘Show Me Your Skull’ and ‘One By One (They Die)’ chug harder on their delirious E-strings than an alcoholic at an all-day beer festival as they slide and chunter through eerie side streets which could almost be Desert Sessions-esque if they weren’t so damn murderous in their pace. ‘Curse Of The Corpse’ showcases the Satyrs’ ability to set a vintage metal stomp rhythm, before settling down into a belter of a biker rock riff which gleefully laps away at itself with only Fairfield’s claw-summoning drums and the murky Hammond atmospherics for company out on the cooling tarmacs of dusk.

After the morbid axe-slinging of ‘Lucifer Lives!’ – one of the album’s longest, yet most cut-throat of numbers – the 12-minute closing title track does strike a rather strange chord as ‘Die Screaming’, err, dies screaming. Almost Earth or Bell Witch-esque in parts, it slowly builds up to an eerie wash of cymbals and one-note riffs as the organ breaks into a kaleidoscope of stereo-bound terror. Burgess’ rapid-fire yelps and squeals soften to an almost baritonic dirge as the Satyrs begin to evoke images of In Solitude battling Mercyful Fate for their Quaalude stash. With just two minutes remaining, things get interesting again as Nettnin breaks out into a final galloping riff that’s straight out of the Textbook of Vampire Doomrock (if that’s even got a remote chance of being a thing) and the spell is finally broken.

So what places Satan’s Satyrs’ ‘Die Screaming’ over and above the many excellent releases from the recent occult rock explosion? Well, in content, very little in fact, but there’s just something about their cart-wheeling speed and intensity that has got me foaming at the mouth to press play on this one over and over again. Clayton Burgess has grown into a frontman to be reckoned with and his werewolf scowl will stick with you for days on end alongside Jarrett Nettnin’s razor-sharp riffs and Stephen Fairfield’s Rudd-esque precision drumming. Die Screaming? You can only hope for that level of demise once Satan’s Satyrs catch you up and run you down.