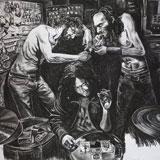 Once upon a time, in a land far away (Japan actually) there once lived a label called Leaf Hound. With a name taken from one of the most influential Seventies rock groups, they put out a universally excellent series of releases new and old, from bands like Church of Misery, Sonic Flower and Ogre to luminaries such as Blood Farmers, Revelation and Iron Man. I can’t remember a single thing Toreno put out in the label’s short lifetime that wasn’t essential. Sadly, the label vanished without a trace (leaving, it has to be said, a lot of angry customers in its wake) and no one label has quite picked up where they left off. Anyway, as the label’s demise became clear, I began to search out the releases I was missing before they became impossible to find, and so it was that I stumbled across a band called Orange Sunshine. Reportedly an ancient recording unearthed, the perfection of their Blue Cheer worship almost had me fooled (“orange sunshine” was also the name of a brand of LSD circulating in the haze of the late Sixties…), but the reality was that it was just a trio of extremely good musicians hailing from Den Haag, led by drummer/vocalist Guy Tavares, who also owns the infamous Dystopia club (and, to the best of my understanding, lives next door to it!). After a quartet of fantastic records that worship at the altar of the much lamented Dickie Peterson, things have been quiet on the Orange Sunshine front, but Tavares is an industrious sort, and is not one to rest on his laurels, and so we are treated to this début full length from his new(ish) band Santa Cruz, which boasts within its ranks two other members of Orange Sunshine (plus three other guitarists in a live setting!!), but is quite a different beast…

Opening with the heaving drone of “Omen”, the trio make it clear that this is not a jumped up version of their other band at all, a mammoth intro that doesn’t have the heavily textured bombast of Sunn O))) or even Boris when they were good (if your memory stretches that far!), but manages equal power with a hell of a lot less. A brutal, punk equivalent that really sounds fresh. Then, “Dorian (You Got Me)” takes the band’s sound into death rock territory, never saw that coming! This kind of dark delight is what makes a record stand out, there are too many bands that are happy to stick to formula and convention, but this creepy start is utterly entrancing! This wonderful power trio can’t stray too long without the fuzz, and it’s kicked in before too long, as Tavares’s unique voice weaves (first whispered, then frantic) around Oscar Wilde’s wonderful novella of the same name (to the best of my knowledge, the only other rock band that has referenced this under-appreciated masterpiece recently is Pagan Altar), before we’re treated to a guitar solo that straddles the border between madness, frenzy and control.

For the third track, “Dr No”, the spirit of Seventies rock is plainly on full display in the form of a huge, melancholic riff, before we’re taken back even further in time for “Demian (Always a Loner)”, which is a hook-laden ode to late-Sixties psych, a soulful and stripped back downer that speaks of isolation and open spaces in that sublime fashion that can only be achieved through music. As if this smorgasbord of musical influences wasn’t enough, the band shifts gears seamlessly into the simply titled “Interlude”, with its deeply resonating notes that are reminiscent of the masterful Dylan Carlson’s blues ragas.

For the Orange Sunshine fans, “Some Say” is probably the track closest to that band’s output, a rock’n’roll ode to the chaos of society, which unexpectedly turns into a blues-rock jam (following in the footsteps of Cactus!) halfway through. But what heavy rock record would be complete without a track reminiscent of Deep Purple? “Black Needle” plays this role with aplomb, with its majestic sweep and rolling riffs! Special points for referencing ZZ Top (this band doesn’t get mentioned anywhere near enough in the modern heavy rock community, and they are as important as the likes of Cactus and Deep Purple in my book!) by covering their cover (!) of “I Thank You”, stripped to its bare essentials. The Santa Cruz version reeks of raw sex and is an absolute STORMER!

The standout track of the album is the masterful side-long “What is Love?”, a huge, hypnotic droning mantra that is utterly entrancing and breathtaking, with my favourite couplet of the album: “Shall I hide or run away?/Shall I crawl or slip away?”. For me, this really struck a personal chord, and it moved me, simple as that. The final side of the album is the triad of “The Very End”, a beautifully written piece of music that ends the LP in utter perfection, like shattered fragments floating through the air and coming to rest, ending as a delicate ballad or lullaby, raw and primal but ending this frequently loud and raucous record on a delicate note that is gorgeously subtle.

So, in conclusion, we have a record that takes in Seventies rock, Sixties psych, Eastern ragas, blues rock and “drone”. You’d think that any band trying to tie all this together would fail miserably, or end up being less than the sum of its parts. Personally, I think this record is fucking brilliant, and it pretty much justifies why I like writing this gibberish. Would I have heard of this band without the Shaman’s guidance? Quite possibly. Would I have given it the repeat listens that revealed its hidden subtleties and genius? In all honesty, possibly not – there’s just too much out there. As it turns out, this record is a musical gift that keeps on giving, a downer if ever there was one, but a breathtakingly varied experience that I suspect will age very well. If there’s a minor chink in this record’s armour, it’s the cover art. A great idea (it depicts the core three members engaging in various acts of intoxication in what looks like Tavares’s bunker), it’s executed in a disappointingly cartoonish fashion. However, the saving grace is that the other artwork/layout is fantastic, with an aesthetic sense that makes the record look like a rare unearthed bootleg, stamped with insignias and Latin slogans that add to the record’s air of mystery. A really rich release that’s astoundingly unique and deserves more attention than it seems to be getting. Absolutely wonderful. 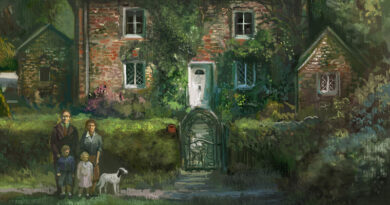 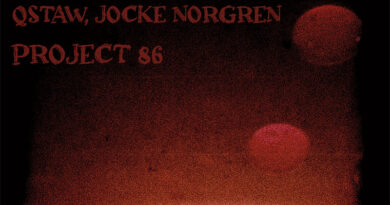