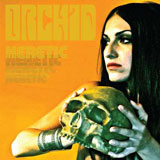 If you’re looking for a band that encapsulates that warm, bluesy feel of 70s hard rock whilst avoiding being an exact replica, Orchid wouldn’t be a bad place to start. Their fuzzy, honest take on the typical doom sound has won round elitists and critics worldwide which is quite a feat for a band with just a single opus to their name.

Their second EP is their first release for new label Nuclear Blast who have clearly caught the doom bug as of late. The record is made up of three new tracks and one from their full length, with the EP effectively acting as a taster for a new market wondering what to expect from the band.

Even before you get to Orchid’s music, the stunning artwork to ‘Heretic’ should prove a strong selling point. An obvious tribute to the band’s love for psychedelia, the cover contains vibrant colours and an occult looking woman which most Vitus fans would give their favourite patched jacket for.

Musically, the eponymous opener is the track that’ll create the most lasting impression with an insanely catchy yet bass heavy take on classic doom. Majestic organ work during the chorus of this song has a truly sinister vibe that is all too often missing on bands of the sub genre.

Follower ‘Falling Away’ shows the band looking to experiment further with an acoustic and melancholic number. This song also shows off the daunting and individual vocals of Theo Mindell that are far more hard rock than doom metal.

Where ‘Falling Away’ is somewhat of a diversion, ‘Saviours of the Blind’ is basically ‘Paranoid’ era Black Sabbath. If you close your eyes and hold that bong really tight it’s possible to imagine the dominant bass line being conjured up by Geezer Butler himself sometime in the early 70s.

EP closer ‘He Who Walks Alone’ is taken from their debut album ‘Capricorn’ which can be seen as laziness or good marketing depending on your point of view. This was undoubtedly one of the strongest moments on the band’s sole album to date and that stomping verse riff still makes most bands seem like incompetent wasters.

Orchid have created an ideal stopgap with ‘Heretic’ that shows promising signs for their second opus. If you like your music textured, emotive and tripped out Orchid may just have delivered your ideal release for 2012.