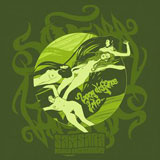 For all their reputation for being meticulous, mechanical and, well, Teutonic, the Germans seem to be developing a nice little niche for themselves as leaders in the psychedelic stoner jam scene with labels such as World in Sound and Elektrohasch and bands such as Colour Haze and now Samsara Blues Experiment.

Judging from the response these guys have been getting in the press lately they look set to follow closely on the heels of Colour Haze and their future is looking bright and there’s no denying this is a band with talent so any misgivings I may have are probably to do with the style as a whole. I’m an old fashioned soul, I like songs…verses, choruses…etc and SBE don’t really subscribe to that school of thought. Opening track “Singata Mystic Queen” for example, is 11 plus minutes of laid back rhythms and wah wah guitar contortions. Driving down the road on a sunny day with the window open and this may seem excessive and indulgent but in a hash den with a massive bong on the go and this kind of thing will weave itself into the tapestry of the room and heighten the experience.

SBE are certainly no one trick pony though. The six tracks that comprise this album show enough diversity to maintain interest as they dip into Krautrock, stoner and even doom for inspiration. Track two, “Army of Ignorance” is a far more concise riff based affair that largely avoids the guitar noodling of the previous track for a tighter, heavier groove. SBE do understand that entering the studio and making it up on the spot can actually be a stylistically limiting format and that structure does lie at the heart of their sound.

Where SBE do impress is their willingness to experiment with sound throwing all manner of effects and instrumentation into the mix including synths, organ, sitar and tanpura. Although the guitar does dominate the proceedings it is often the sounds emanating from the background that catch the attention and lift the whole experience. Vocals here are also kept to a minimum, the sparse, Jim Morrison-esque croon may be an acquired taste but it does work within the lazy sprawl of the music…Ian Gillan or David Coverdale would simply sound out of place here.

I do hate to be negative though but there are a couple of points here that don’t sit so comfortably with me. For a band that relies so heavily on the guitar as a lead instrument, although Christian Peters and Hans Eiselt are perfectly competent, neither possess the wow factor that would fire this recording into the stratosphere. Neither guitarist seems to stretch out and throw themselves outside their comfort zones so that by the final track it’s all starting to become a little too familiar. Secondly the overall sound here lacks the clarity and general oomph that would make the songs sparkle. Then drums sound distant and the guitar tone especially lacks depth, opting instead for a slightly grating snarl. At best this sound like a half decent demo as opposed to a world class recording which is a shame as a decent production would have lifted this experience to a much higher plane.

Overall this is a decent album. It won’t get anyone up and dancing at any parties but by the end of the night when the smoke is hanging heavy in the air this will be the perfect soundtrack.