This album drops right in. Recently there has been a mild return of the lengthy, corny, skippable, faux-atmospheric intro tracks, and clearly this unit, made up of members of Fistula, Abdullah, Sofa King Killer, and Rue (to name a few) are not having any of it. Perhaps it’s a reflection of the album’s title Discordian, a mock religion/philosophy that mind-bendingly sees order and disorder as equal and human-made. Regardless it’s a refreshing start.

The pandemic, as with many artists, took its toll on this band. But they kept writing and working throughout the months of misery. And if you take a silver-lining approach, it paid off.

This is an extraordinary overall mix, it’s a really clean, scuzzy record, with some very heavy moments. It was recorded at Akron Recording Company by Sanford Parker, mixed at his own Hypercube Studio in Chicago, and mastered by Colin Jordan of Boiler Room Mastering. Why should you care? Because this is an almost perfectly mastered album. Everything is balanced. You can hear the surprisingly clean bass, drummer Jeff Sullivan’s ride hisses perfectly and cymbal hits are hits, not part of a sonic mud.

Mike Burns’ guitar solos are pained, profound journeys that scatter over this absolute powerhouse of a rhythm section…

The vocals take centre ground on this record. Jeff Fahl channels the power of Phil Anselmo, albeit with his very own brand. I hope the physical release comes with a lyric booklet because it sounds like there was some serious deep thinking in the writing of this. Again, it’s no wonder if you’re getting into the tenants of Eristic Principles (no, I don’t know either – Google it).

Painless Void is a very strong track. It does noodle to begin with, and this album is not free-from noodles (At The End Again goes into this territory as well). However, on Painless Void it feels like the band really let rip in the heavier instrumental sections. Mike Burns’ guitar solos are pained, profound journeys that scatter over this absolute powerhouse of a rhythm section. We shouldn’t be at all surprised with the music CV/resume this band has, but it’s nice to hear the experts do their thing and kill it. Chris Chiera’s bass playing is excellent, it’s great to hear some movement and creativity in the heavier sections from the low end, not just a guitar support.

Could the final track They Look Like Good Strong Hands be a reference to the NeverEnding Story? You wouldn’t know from listening to it. It’s a fantastically savage and brief end to a great release. So, this Akron ‘supergroup’ finished as they began and is out now on Mike Burns’ own Elburno Records. 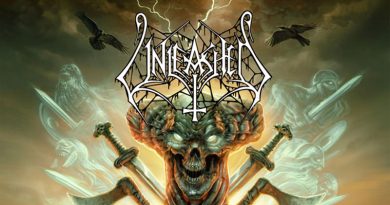