Championed by the likes of Julian Cope, Thurston Moore and Byron Coley who once called them a ‘human zoo’ (somewhat fitting), Sunburned Hand Of The Man are a confusing and hard to pigeonhole outfit from Boston, Massachusetts, a city with quite a lengthy musical history. This ranges from the uncompromising Straight-Edge Hardcore of bands such as SSD, DYS and Negative FX, Doom pioneers Grief, Post-Punk outfit Mission of Burma, Hard Rockers Aerosmith, New Wavers The Cars, influential Alt-Rockers The Pixies and that’s barely scratching the surface.

Formed in 1994, Sunburned have released an overwhelming and extensive list of releases and could hardly be accused of creative inertia. Headless is the latest one of these and is due for release on 28th February. It is a vinyl repressing of a cassette that went under the name of Intentions with a limited release of 20 copies back in 2017. The artwork curiously reminds me of an alien intruder from John Carpenters’ They Live and currently the band consists of founders Robert Thomas and John Moloney with Jeremy Pisani, Ron Schneiderman, and Gary War rounding off the line-up.

Prism Mirror Lane opens the record and is a mellow Grateful Dead style piece that eases you in nicely. The aptly named Experiments and Born Clever add some tasteful electronic embellishments alongside the freeform Amon Düül-esque Krautrock goodness. The Electronic elements never threaten to overpower the music but instead enhance it.

The free-form improvisational Jam approach reminds me of some of the bands Greg Ginn signed to SST circa 1985-1990; Semantics, Tom Troccoli’s Dog and supergroup October Faction to name three. There is a Desert Rock/Stoner vibe here too, The Great Hope for example has a feel of a band like Yawning Man and there is something quite transcendental and calming about it, while some of the spacier elements bring to mind Japanese Psych outfit Acid Mothers Temple.

After a somewhat sedate start the album picks up a little and a heavier tone is gradually employed, particularly with the track Coffee And Cheese. The album mellows out briefly with Unsustainable before picking up with the Motorik style beat of Agitation Cycle, which reminds me of the ‘traffic cone’ era of Kraftwerk (the first two records featured traffic cones on the front cover) and alongside The Great Hope is one of my favourite tracks on the album. The record alternates quite nicely between wailing Desert Rock and downbeat moody electronic Psych throughout.

The Most Relevant has an Ummagumma era Pink Floyd feel reminding me of Grantchester Meadows with its Folk guitar before the album closes with the bass driven Framework, the only track to feature vocals.

The album is experimental and challenging in places but not necessarily difficult to listen to. The songs are, for the most part, short and therefore never feels like its outstaying its welcome. Headless reminds me of The Boredom’s Vision Creation Newsun in its Krautrock influenced loveliness, which seeing as that is one of my all-time favourite records is A-Ok with me. Sunburned has followed a somewhat similar creative journey to the Boredoms, earlier works such as Wild Animal are discordant and harsh (still a lot of fun though) whereas here we have an altogether more mature and intricate piece of work.

Headless is so diverse in its influences that it may take a few listens to fully engage with and provided you don’t have the attention span of your average Love Island contestant, then I think you will find a lot to appreciate in this subtle and rewarding album. 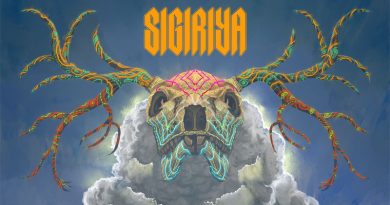