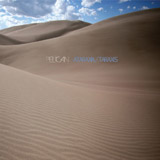 This EP from Pelican is a fairly tantalising glimpse of what we might be able to expect from the next album, being as how it only feels really like two ‘proper’ tracks, bookended by two very well put together, yet oddly insubstantial numbers (although the last track does find a fairly rocking climax).

The two main tracks are a more direct couple of rockers than some of the band’s recent output, this amounts to a hopeful record all told for those that thought that the band’s releases since their nearly genre-defying ‘Australasia’ album laid down what turned out for them to be an unmatchable gauntlet in terms of heavy, yet artful instrumentalism. To my ears, while everything they have done since has been ‘Pelican’, i.e. distinctive, finely wrought stacks of building riffs, backed by slightly clumpy percussion, it has all been a dilution of that very fine vintage wine that was Australasia. There is a problem, which this EP highlights, but more of that later.

The last album, ‘What We All Come To Need’, was a step back towards the freewheeling oneness of ‘Australasia’, and this four-tracker might well be the bridge between WWACTN and something truly exciting. But more of that that later (it’s coming, don’t worry). The EP kicks into gear with the groovy riff of ‘Lathe Biosas,’ which somewhat harks back to tracks off ‘Australasia’ by sounding organic and unforced, the four guys disappearing into their playing rather than sounding too considered. As their live shows testify, Pelican very much wants to be seen as a rock/metal outfit, not an ethereal, shoe inspecting affair. When they do gel completely, as happens a few times on this track, you forget about the lack of vocals and just enjoy the ride.

The third song of four, ‘Parasite Colony’ is an effective, slippery slow-burner, with a whole lot of atmosphere in its riffs, which centre on a big catchy descending number. However what’s going on here? You suddenly realise it’s a slowed down version of the lead riff in ‘The Ephemeral’ off WWACTN. Er… OK give them a break, dance acts sample themselves willy nilly, fuck about with everyone else’s stuff, why can’t Pelican? For a band that has received a lot of stick, for not being very heavy, for being ‘boring,’ for having a dodgy drummer, it seems churlish to complain about them recycling one of their own riffs, but it’s there, there’s no avoiding it. However maybe the fact it’s so blatant must mean they aren’t afraid of being accused, and happily flaunt their green policies when it comes to riffs.

So I come finally to the ‘problem’ with this band, they undoubtedly can sometimes coalesce together to some misty peak of collective unconscious (them and the listener) where it is a genuinely spiritual feast upon riff after riff, and you don’t miss the human context of vocals or the slight lack of freedom which other instrumental bands (from Don Caballero to Conifer) tend to release, freed from the tyranny of ‘song.’ However these moments (save on Australasia) are few and far between. It’s almost as if they are in a self-made prison, of continually having to fill songs with guitar parts, so inevitably they will end up reusing one. There just aren’t enough riffs in the world for everyone ANYWAY, but Pelican want more than their fair share! Here’s hoping the new album can embrace the hints of darkness and unconscious joy on this EP and return to that fabulous continent they left a long time ago.