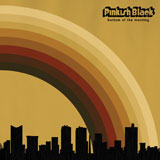 When longstanding friend and bassist Tommy Atkins of Ft. Worth, TX trio The Great Tyrant took his life in 2010, surviving members Daron Beck and John Teague adopted the new name Pinkish Black (the unique color of drying blood) as a tribute to his memory – Atkins was a revered music figure in the TX underground scene, both intimidating and inspiring, and well known for his quiet creative genius and penetrating, almost monk-like stage presence. Pinkish Black has never really tried to move away from the shadow of his death, but instead has embraced it with a sound and spirit that deftly portrays the darkest sides of humanity without being mired in them. The duo’s 2012 Self-Titled debut and 2013’s Razed To The Ground drew many favorable reviews, as their new signature style was a refreshing departure from the norm – Beck (vocals/synth) and Teague (drums) stripped the armor in favor of an even more electronically twisted approach; part krautrock, part doom, part horror score, part whatever – imagine Dario Argento trapped in an anechoic chamber with an unlimited supply of synth pedals and psychotropics…Now three albums in and Pinkish Black may have found that ‘sweet spot’ as Bottom Of The Morning is easily their best offering to date and sees Beck and Teague at full creative stride.

It’s fitting that the last recorded material as The Great Tyrant was co-released with Bottom Of The Morning – The Trouble With Being Born finally saw the light of day this past October (both released on Relapse Records), and ultimately closes an artistic chapter that has both haunted and fueled the duo’s search for a novel musical identity apart from Atkins’s legacy. Tracks like Brown Rainbow and Special Dark feel assured and comfortable in their own skin, with swirling synth and tribal rhythms echoing behind Beck’s operatic wails – it’s a more subdued take on The Great Tyrant’s notorious near detonations and floridly chaotic arrangements. Analogous to New Order’s Power, Corruption, And Lies (1983) in the wake of Ian Curtis’s suicide, it took an album’s worth of cathartic output (1981’s Movement) for that band to feel content to shed the overt shackles to the past. Beck and Teague, in a similar vein, are able to pay tribute to their history without repeating it.

I’m All Gone struts with a blown out bass synth riff and mid-tempo groove that demands a looping head nod; but no matter how strong the hook, the backdrop is undeniably weird – winding sounds and frequencies contort, expand, and contract – in fact, it’s like every day for Pinkish Black is a 70s horror movie where a trip to the theatre or the local pub could at any moment erupt into a maniacal slaughter fest.  It’s this tense undercurrent that gives the band its sinister appeal – Everything Must Go pushes that appeal and fulfills every ounce of potential; a slick rhythm and slithering bass line welcome Beck’s rich baritone croon before exploding into a jagged staccato attack – his voice almost drowning behind the song’s evolving disintegration.

Pinkish Black carefully chooses its breaking points – most of the album is on low boil, but the sheer nature of its players assures an unpredictable flash point. This is uneasy listening at its finest and another win for Relapse. Highly Recommended.