Dear readers: my best guess is that I’ve seen Paradise Lost live somewhere in the region of a dozen times. Some of those shows have been joyously cathartic occasions where the band struck just the right balance of aggression in their performance and showed obvious pleasure in doing something they love to do. Other shows have been dour affairs at the end of torturously long European tours with Nick Holmes’ voice barely delivering full lines without cracking, and the rest of the band looking frazzled and clearly in need of being elsewhere! So this ‘live at a venue without any crowd’ performance was something that I approached with equal measures of hope and reservation.

I’m sure almost all of us have watched at least one online stream event from a favourite artist during the pandemic lockdown, and they’ve been a welcome distraction for fans and a much-needed revenue stream for bands starved of their usual tour income. I must admit that I didn’t catch this performance live – it passed me by – but the resultant proper release of At the Mill is a welcome bonus and should hopefully whet our appetites for the long-delayed return to real live shows.

This review had originally been intended to be published prior to the release date, but unfortunately the digital files that I received were of such poor quality that it was almost unlistenable. So, having waited for the full CD and blu-ray release to land in my letterbox, I am now happy to report that it looks and sounds just grand.

The performance footage is all in very close quarters. There is no attempt to portray this as a ‘normal’ gig, in fact you can count the number of wide shots which include the whole band on one hand. Instead, the director has chosen to use multiple close-up angles and subtle and consistent low-level lighting. The effect of this is to make it feel like you are floating around during the most focused practice session any band has ever had – and it works well. There is zero interaction between the band members, and no between-song banter at all. I understand this choice, but as this is very much a performance for the fans it maybe would have been nice to at least wink at the camera once (not a very doom-metal thing to do, but you understand my point).

The setlist is a really good cross section of their whole career. I’d struggle to see anyone with an understanding of the history of the band taking issue with the selection…

The setlist is a really good cross section of their whole career. I’d struggle to see anyone with an understanding of the history of the band taking issue with the selection (except for me in a couple of paragraphs’ time). The inclusion of Gothic and As I Die will keep the original death/doom fans happy, whilst those fans who came on board during the more divisive ‘Depeche Mode with distortion’ era will lap-up the likes of One Second. Only one track from Draconian Times might at first appear slightly odd, but we’ve heard that material in its entirety in a live setting before (and will do again at Bloodstock later this month) so making room for other, maybe lesser known tracks, is a positive in my view.

From a personal perspective I must say that I found the tracks from the more recent albums to be the most compelling. I’ve said before in these pages that Plague Within is possibly my favourite Paradise Lost album these days, so I was really pleased to hear satisfyingly thunderous versions of No Hope In Sight and Beneath Broken Earth. Equally, the material from Obsidian is as heavy as a bag of spanners, and perhaps inevitably the band seem at their most committed when playing these tracks.

Have I got any criticisms of the whole package?…well of course I have, as I’m a cantankerous old bastard (much like the band themselves I’m sure). The one omission I see is the lack of a 5.1 mix on the blu-ray. I know this is a very niche request, but I’m sure capturing the full sound of the room/mill would have made a more immersive experience. My only other issue is that more than ever before the band are using pre-recorded backing tracks to supplement their live sound. I’m sure that in some ways the pandemic limited the personnel that could be involved, but with this being the case I would have liked them to select the setlist to avoid backing tracks as much as possible. I think this would have given the performance a more organic feel, which would have been great, as by design the show was set in a sterile environment.

I’m not sure that At The Mill is going to bring any new fans to the band – but I’m not altogether convinced that this is the intention. What this package does is maintain the link between band and fans, and also keeps the new tracks in heavy rotation so that when they get back on the road and are finally able to support the record, it still feels fresh and new.

Am I keen to catch up with Paradise Lost again once the tour bus is wheeled out from behind the mill?  Absolutely – I’ve already got my tickets for both Bloodstock and the February UK tour. Live (and in person) music – we’ve missed you. 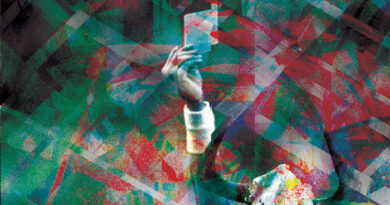