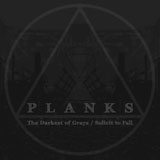 You’ll be unsurprised to hear, given the Crust content of SL’s latest batch of releases, that the oddly-named Planks are purveyors of epic dark crusty hardcore/metal, and – as with the Alpinist and Drainland releases – this CD is a compilation featuring two of Planks’ vinyl-only releases, namely their ‘The Darkest Of Grays’ LP and ‘Solicit To Fall’ EP.

Fans of His Hero Is Gone, Unearthly Trance and Neurosis’ gnarlier material should find much to get their teeth into with Planks as they operate within similar parameters – dark, brooding, fierce hardcore with a rusted metallic edge and an epic, yet oddly claustrophobic, quality – without being overtly reminiscent of anyone in particular. It was Jeannie Saiz of the mighty Shroud Eater who first turned me onto these guys last year, so I’ve been familiar with their material for a little while already and it was no real surprise when I heard that Southern Lord was putting this CD out, seeing where Greg’s tastes seem to be lying at the moment.

Yessir, Planks are FIERCE and heavy make NO mistake, but they also understand subtlety and dynamics which goes a long way toward putting them ahead of the pack. Planks don’t just thrash and pound away in one-dimensional fashion, there is an ebb and flow to their music and even a sense of melody that they deploy with skill. Take, for example, the slightly discordant melody that flows through ‘The Dead Return To War’ – it serves to leaven the sound somewhat and offset the churning heaviosity surrounding it, but it’s still off-kilter enough to leave a disconcerting impression. In fact, the whole track serves to illustrate my point about Planks understanding of dynamics, as it crashes in on a powerful bassline and jaggedly melodic guitar refrain, overlaid with powerful vocals, before kicking down a notch for a few bars and emphasising the fragility of the guitar line – a thread throughout the entire track – punching the bass back in, then taking it right down to low, insinuating vocals over a skeletal backing. This in turn is punctured by violent, slow crescendos of guitar until a throbbing bassline takes the song in a more linear direction. The guitar here evokes a Killing Joke feel, all odd, distant, discords, until everything resolves back into the same off-kilter melody as we came in on.

The band make use of narrative interjections with a dreamlike sense, as on the intro piece ‘De¦ünaturer’ and the later ‘Fantasmes’, in which a soporific-sounding female voice talks of eyes, oddities of vision and the logic of dreams, plangent, contemplative post-rock-a-like guitar piece ‘We Are Transluscent’, and ‘A Casket City’, the closing track of ‘The Darkest Of Grays’, a foreboding piano piece that echoes and warps the guitar riff of the title track, which immediately precedes it. These brief asides go toward adding a sense of ‘otherness’ to Planks, aided by their use of strange melodies and discords.

That’s not to say Planks err towards the arty-farty, far from it, rippers like ‘Sacred and Secret’, the PUMMELING ‘Tentacles (Solitude Prevails’), ‘Scarlet Inside’ and the borderline-black-metal thrashing of ‘Miasma’ abound, along with brooding numbers such as ‘No Solid Grounds’, ‘Fallen Empires Are Ruling’ and the hulking title-track ‘The Darkest Of Grays’.

Since this release is essentially two separate records welded together, it comes as no surprise to learn that the four tracks from the ‘Solicit To Fall’ EP – the last four tracks on here – are of a slightly different hue than the preceding ones. ‘…And Rivers Will Follow’, ‘Into The Nothingness Within’, ‘Miasma’ and ‘It Just Can’t (l.s.f.d)’ – which is bordering on power-pop-punk, with it’s catchy riffing and smashing bass undertow (I’m exaggerating, of course) – are all just a little more basic in construction and thinner in sound than ‘The Darkest Of Grays’ tracks. Not that they’re boneheaded simple, but more that they are a little more ‘standard’ sounding than the more mature-sounding album tracks. Sure, they’re heavy and fierce with some interesting riffing, but they just suffer by comparison. At this stage, Planks were more on par with fellow Euro-brooders Systral and Carol, but by the time of ‘The Darkest Of Grays’ they had easily outstripped ’em. That said, I wouldn’t kick these tracks outta bed for eatin’ crisps, if you know what I mean.

So, that’s ANOTHER solid winner from the mighty Southern Lord’s campaign for crust domination!