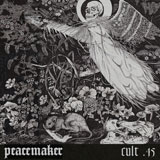 Peacemaker – now there’s an ironic band name if ever I heard one. The only peace Peacemaker make (try saying that after a few shandy Basses…) is the substantial silence that washes over you as ‘Cult .45’ fades out into the stoner metal ether after nine solid tracks of banging and bruising heavy metal. The Londoners, who feature current and former members of death-metallers Infliction, capital noiseniks Satanic Fatwa and Northern thrashers Ravens Creed, have been smashing their crunching, doomy racket around since 2010 and their 2012 album sampler/demo certainly grabbed my earlobes more firmly than Paul McCartney snatching at yet another shameless paycheck. Well, maybe not quite that hard, but still, I know I enjoyed it.

Double-combo openers ‘The Siberian Problem’ and ‘Follow the Rats’ swallow more than a fair whiff of The Sword or Saviours, but also lean further into old school thrash territories than today’s traditional stoner fodder tend to plod along to. Singer Al Osta rasps and barks over the chugging riffs with tales of the struggle of humanity and potential Russian mutants as drummer Rich Maw savages his kit like Roy Keane playing darts with Alf-Inge Haaland’s limbs. There’s even enough of a hint of fun in the bounciness of ‘Follow the Rats’ to lend me the maddening thought that Cult .45 could explode into a full-scale Municipal Waste-esque metallic jousting contest if things continue to remain quite this lairy.

Fret not though (or rather do if you happen to be a guitar-player…) as ‘Dead Man’s Keys’ is a smouldering heavy metal campfire tale of a city banker who bites off more than he can chew with two prostitutes, a length of rope and a dark wood at night. Say no more, say no more guv’nor? Osta does, and his voice takes to the croaked whisper of his protagonist with a tremendously powerful effect. Guitarist Sam Taylor’s crooked solo is the icing on the cake of one of the record’s proudest, yet darkest, moments. With ‘Mane of Serpents’ and equally on closer ‘Grey Sky’, Peacemaker travel to the other end of the heavy music spectrum – the folky, instrumental, medieval cackles of acoustic guitar and the dizzying warp of electronica. It’s a welcome respite from the chewy, lip-smacking riffs that the record elsewhere rewards us with, whilst all the more it ensures the notion that Peacemaker aren’t just another numb-skulled, one-dimensional machine of metulz. There’s a much more subtle intelligence afoot in the way that their debut album comes together and always plenty worth waiting for around each corner.

That said, the denim n’ leather-clad foursome strike back with ‘Soul Cheater’ and ‘Journey of the Faithful’ – feverishly thrusting at the G-spot of riffage they’ve so far eagerly teased and tormented in their boudoir of doom. The former sees Maw’s precision behind the kit return to the foreground as Taylor and bassist Al Lawson sink back upon barstools of bourbon-soaked riffery that COC or Crowbar would be pleased with. ‘Journey of the Faithful’ resurrects that sense of fun from earlier in the record as the song swaggers and sways across the poop-deck of some bygone pirate galleon like a posturing outlaw storming the high seas. Peacemaker themselves declare the standout track to be “a rip ride homage to the glory of volume and mayhem” and I can’t say I disagree with their analysis.

As with ‘The Siberian Problem’ and ‘Dead Man’s Keys’, ‘Sorrow Trip’ was previously made available via Peacemaker’s 2012 demo, yet it seems to have been spruced up to its full Vitussy, Candlemassian doom potential for the full length. As Osta snarls and sniggers across the languishing guitar chords, Maw and Lawson kick the band into overdrive and the thumping rhythms that close out this doomy smog of an album are as murky as the corpses lying at the bed of the Thames itself. This isn’t some crazy ass Om-style cleverness, nor is it a Fu Manchu riff-by-numbers special, but Cult .45 does lie somewhere in between and that’s certainly worth more of a punt than whatever Paul McCartney pulls out of his shitsack of Monopoly ‘Chance’ cards next.