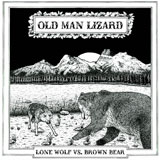 Old Man Lizard are headed by the prodigiously talented Jack Newnham (he also drums for the outrageously good Meadows), who vocalises the lyrics and plays the six string guitar. The other two members are Gav Senior, who plucks away at the four string bass guitar, and Dan Beales, who meets out rhythmic violence on the drums. OML are from Suffolk, which is historically part of the Kingdom of East Anglia, yet they maintain close ties with not so far away London and it’s plethora of fine bands such as Slabdragger (indeed main man Sam Thredder plays the organ on this album and also recorded it live at his Cro’s Nest Studio in the south of the capital). This is their debut long player, composed of nine songs, running at about forty minutes long, and I must say that it really is a very enjoyable listening experience indeed. Jack’s throaty bluesy roars and rasps really do offset the oft-intricate guitar-led beauty of the songs, whilst Dan and Gav are more than able at skilfully underpinning Jack’s rampaging axe shenanigans with a rock solid and effortlessly fluid rhythm section.

Tracks such as the atmospheric opener Hippocastanum Warrior showcase dazzling licks and riffs that fly off Jack’s fingers like he was born with a guitar in his hands (which would be very painful for the mother – presumably it would have to be a Caesarean Section to avoid damage to the birth canal). Tempo changes abound with abundant ease but not in an overly self-indulgent sense and the whole vibe is at once refreshingly original in its style and execution but also pays some respectful service to a broad range of bands that have graced stages over the last thirty years or so. At points I can hear tinges of Neurosis, Slint, early Sleep, and in particular, above all else, the desert-baked stoner-prog of Kyuss, although Jack’s attractively throaty voice thankfully has no connection to Garcia’s strident rock bellows. The low-in-the-mix vocals have more of a sludge/hardcore roar to them, and for me that works so well as a more raw counterpoint to the sophisticated undulations of time change and fret work that make up Old Man Lizard’s forte.

There is a strong sense of American folk-styles, such as bluegrass, running through OML’s work too, as evidenced by the novel appearance of banjo and harmonica on the title track in particular (a nod perhaps to Earth, and Dylan Carlson’s latter stage of his career appreciation of traditional American music). All in all, this is a seriously mature and accomplished collection of songs, which is all the more astounding seeing as it is Old Man Lizard’s debut album. Upon hearing their stunning extended play a few years ago (which I also reviewed here), I just knew that these three troubadours were going to impress with their dizzyingly competent and rural Suffolk sludge-blues, and impress they have.  Soulful, skilful, earnest and eminently listenable, Lone Wolf Vs Brown Bear is all those things, and still manages to be very fucking heavy too. What more can a gentleman of taste ask for?