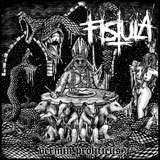 Around since ’98, yet often overlooked in favour of the likes of Grief, Dystopia and Noothgrush, Ohio quartet Fistula churn out a sound that’s as ugly and hateful as the sludge genre can possibly get. However, rather than being a hidden “diamond in the rough”, Fistula revel in it and part of their charm is the fact they genuinely seem not to give a fuck; remaining as gruesome as their namesake (an abnormal connect between tissue – Google Image search it, I dare ya).

Vermin Prolificus is the band’s sixth full length and their first in as many years – that’s not to say they’ve been inactive, however, they have a respectable number of splits and EPs covering that time span (most notable is their 2012 collaboration with Coffinworm). This album doesn’t pull any punches, it launches straight into Smoke Cat Hair And Toenails and, while the production quality sounds like absolute shit, the fuzzy quality actually works in Fistula’s favour, giving the guitar a weighty kind of energy.

Dan Harrington’s gruff, feverish rasps lend a hardcore kinda quality to the music and are complemented by a hefty dose of sound bytes from the 1980s slasher flick Don’t Answer The Phone. While Vermin Prolificus is first and foremost a sludge record, this doesn’t stop these guys from flirting with hardcore and punk throughout and this is seen is the fast and furious tracks of Harmful Situation, Sobriety and Goat Brothel.

Fistula are no stranger to covering the topic of drug use, abuse and addiction and nothing’s changed as far as this record is concerned. Sure, this may be a well-played out theme, especially with bands such as EyeHateGod, but just because it’s unoriginal doesn’t mean Fistula don’t execute it extremely well, and this is especially prevalent with the placement of lines such as “the drugs are more important than you”.

Vermin Prolificus is an astonishingly heavy body of work and while it may not be the best sludge album out there, or even Fistula’s best work, it still has enough vitriol and distortion to make it well worth the listen, knowing precisely when to employ a “go fast or go home” attitude and when to slow down again. There’s just one thing to bear in mind when listening to this: the sludge is more important than you.