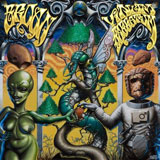 For a label barely 2 years into their existence, Doomanoid Records have grown at a rate far beyond their tender age from their inauspicious beginnings to a label putting out some very fine, not to mention imaginative packages…just check out the new Misty Morning red vinyl 12” for proof. And so it is they have pulled together two names that should be pretty familiar to all fans of the doom genre to share space on this shiny silver disc.

First up are Groan, a band that grew from a one man bedroom project into a fully functioning four man beast before the pressures of distance…etc caused them to implode. These two tracks mark the swan song for the original line-up who released a very impressive debut on Doomanoid last year to great acclaim. Is it a fitting send off? Yeah it is as the band clearly seem to have gelled in their time playing together into a strong, cohesive unit. Both “Cosmic Boogie” and “Throne Of Weed” remain true to the blueprint laid out on the album as both tracks kicks up some fine boogie doom that owe as much to the founding fathers Black Sabbath as they do to prime “Hopkins” era Cathedral. Both tracks kick along on some meaty riffing and the vocals of Mazz…or Mazzereth as his nom de plume dictates, show greater power and depth than on the previous album, possibly due to having more time to work through ideas and the better recording environment. Refreshingly the band steer clear of the slower numbers and both tracks are fiery rockers peppered with some tasty 70’s references. Hopefully this isn’t the last we’ve heard of Groan as these tracks display that the band were definitely on the ascent at the time of their split.

I was cautious before hearing Vinum Sabbatum. The name had me expecting some monotonous, slower than slow, crawling dirge like doom that would be as compelling to listen to as it would be to wade through a mound of shit. I was pleasantly surprised, nay overjoyed to hear that the band, although rooted in doom, show even deeper roots in classic 70’s rock and prog. Whereas Groan take 70’s rock and give it a modern kick in the nuts, Vinum Sabbatum take 70’s rock…well, they just take it, hold on to it and refuse to let it go. Unusually in this day and age, the band’s sound is largely led by some meaty Hammond organ and backed up by a lovely vintage guitar tone and superb Ozzy-esque vocals. The presence of the organ will no doubt draw comparisons to Deep Purple but this is actually far closer in spirit to the darker more experimental tones of early Atomic Rooster. Over the course of their two tracks, these time travelling Finns run the gamut from harder edged grooves to spaced out psychedelic bliss and succeed in making the nearly 11 minutes of “Disillusioned Pilgrims” sound half that length such is the variety and scope of the ideas that permeate Vinum Sabbatum’s sound.

Generally with split releases one band will shine more than the other. In this case the differences in sound between the two bands allow them equal time in the spotlight without pitting them in head to head combat with Groan offering a lighter, less cerebral take on some fine doomed out rocking goodness and Vinum Sabbatum putting more flesh and texture on he bones for a deeper listening experience. On top of the 4 great tracks on offer here, if you buy the CD rather than a digital download you also get some breathtaking cover artwork from Ralph Walters complete with hidden coded messages that supposedly reveal themselves upon consumption of mind bending chemicals. If anyone does decide to try this let me know how that works out for you.