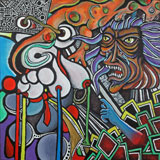 Somewhere on the cusp between sleeping and waking, reality and dreaming, sits the music of Nooumena. Beautifully slurred, haunting and haunted, this French quartet sit comfortably amidst such fellow musical somnambulists as Time Of Orchids, Kayo Dot and Pony Express Record-era Shudder To Think, all makers of music fit for a restless night of beautiful dreams that suddenly turn a much darker hue.

Also thrown into the mix here are progressive moves akin to the late-lamented Oceansize, a hint of Radiohead and definite shades of Van Der Graaf Generator, thanks to some well-placed saxophone and an overarching sense of darkness. Quite the interesting melting pot of tones on offer here, but all skilfully blended into a deeply satisfying broth of edgy, occasionally astringent, art-rock.

‘Nameless Reward’ creeps up on the listener, stealthily insinuating itself into hearing range via musically percussive clicks, a tone not unlike a distant marimba, the midnight sound of the saxophone and guitar notes that fall upon the ears like water droplets. The overall vibe is similar to that adopted by Ulver for their late-night urban themed pieces like Perdition City and parts of Shadows Of The Sun, but more organic in hue.

Vocally, the same kind of deep melancholy as that expressed by Kris Rygg is clearly articulated. The pace builds as drums and throbbing bass are introduced, with the guitar playing a gorgeous pattern reminiscent of Radiohead’s beautiful, haunting ‘Knives Out’ before switching into something more minimal and cyclical as the saxophone and vocal assume greater prominence. At this point Nooumena have achieved the perfect synthesis of Ulver and Van Der Graaf Generator – not a million miles away from the track ‘Facets 2.0’ on Fleurety’s masterful Department Of Apocalyptic Affairs.

‘Decadence’ amps up the jazzy feel with some loose and limber drumming, Fred Frith-style guitar and that blue-toned saxophone amidst layered, breathy, almost falsetto, vocals and some decidedly ‘out-there’ chord choices that go a long way toward nailing the ‘sleepwalking’ vibe. ‘Bygone Ages’ is more rhythmically and vocally forceful in parts, but alternated with achingly gorgeous harmonic parts and some sustained ‘Frippertronic’-style guitar parts. Nooumena approach funk in the closing minutes of this number, until darting off into darkly layered sax parts and noir-ish ambience.

‘Le Plouc’ takes a rhythmic approach that is part ‘Pony Express Record’ and part ‘Larks Tongues In Aspic’-era King Crimson, replete with David Cross-style violin and Jamie Muir-esque whistles, vibraslap and off-kilter thumps and clanks – the dreamy ambience rubs up against staccato jazz-funk – and adds in a classically baroque guitar segment to boot. This isn’t all some empty showy gesture on the bands part, though, as it all hangs together beautifully in that ‘dream logic’ way. The sighing, almost wordless, vocals adding much melodic texture to the occasionally spiky music being generated here.

Elsewhere, the lush dreamy ‘Cold Comfort’ pits gorgeous guitar refrains against jazz trumpet, and the tension of ‘Somehow’ moves from short-wave radio drones and bleeps, through shimmering chords, finger snaps and Theremin into toweringly dark, yet infinitely subtle, majesty. This darkness carries through into eleven-minute closer ‘Taedium Vitae’, an extended workout of pulsing drums, astringent guitar, dirty fuzz and submerged vocals, shot through with violin and ending in a chaos of demented voices and ever-loudening churning electronic static that devours all of the instrumentation, leaving only a howling vocal abyss.

Nooumena make beautiful music with a decidedly creepy edge to it – in some ways like the audio equivalent of a David Lynch movie. Their threat is always implied, never overt, and coming from somewhere indistinct below the surface, creating that woozy, uneasy feel.

Admirers of the experimental, avant-garde end of Norwegian Black Metal and those who appreciate the darker moments of jazz will find as much to dig into here as those brought in by the progressive  elements and those who favour the sound known as R.I.O – that’s Rock In Opposition to you and me, think Henry Cow, Univers Zero, Art Zoyd et al – as well as listeners who straight-up just enjoy well-played, GOOD intelligent music. Seeing as how ‘progressive’ is no longer considered a dirty word, that’s quite a few folks who really should be checking Argument With Eagerness out. Join ’em.