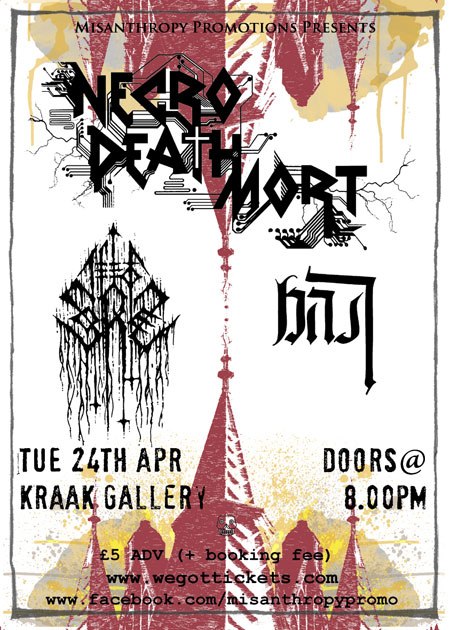 As part of their upcoming European tour (including a slot at Roadburn Festival 2012), London electronic/drone/doom alchemists Necro Deathmort will stop off in Manchester on the 24th April at the Kraak Gallery for a one-off, extra-apocalyptic evening alongside distortion fiends Tree of Sores and Bast for Misanthropy Promotions – promising to showcase each band’s differing approach to atmospheric tension and doom pathos.

“When Necro Deathmort’s auspicious debut… hit the racks back in August 2009, it was somewhat of a sleeper hit. Thanks to its effortless blend of brutal electronics, velvety drone, decaying doom, crushing guitars and skuttering dubstep, it slowly gathered momentum through the early months of 2010, and word-of-mouth ensured that this album ended up in any open-minded record collection, eventually scoring members Matthew Rozeik and AJ Cookson support slots for Ulver and Shining, festival places at Sonar and Supersonic, and garnering ‘best-of-2010’-type reviews. Terrorizer declared it as “a work of pure schizoid genius”, Decibel Magazine suggested that “all future experimental dub metal artists should look to this album to see how to get ’er done”, and even Zero Tolerance said “[the duo] blend low-level hip-hop beats with Scorn-esque bass and elonated guitar riffs to remarkable effect. . . it’s that awesome.” – Distraction Records.

Tickets are available for £5 ADV at www.wegottickets.com.

The full tour dates are as follows:

HEXVESSEL Premiere New Video For The Track ‘Masks Of The Universe’