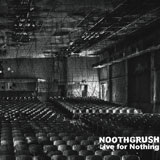 San Jose’s lovable sludge slackers Noothgrush are a difficult band to follow – in their seventeen year career they’ve released a handful of demos and split 7 inches, a rarities collection and one album, all of which are pretty hard to get hold of due to their limited runs. For a band that came from the same Bay Area scene as Neurosis and Sleep and who shared the stage with the likes of High on Fire, Grief and Burning Witch they ought to be far more-well known. But because Noothgrush very rarely toured and broke up a bunch of times due to a combination of conflicting interests and their own apathy they’ve become that rarer of beast; they’ve become a cult band.

Live for Nothing is Noothgrush’s first, widely-distributed release – a collection of two radio broadcasts the band did in 1996 and 1999 respectively. In the grand scheme of things this means that the recordings capture the band during their heyday and as such the tracklisting contains very few surprises for fans of the band. Like their previous compilation Failing Early, Failing Often, Live for Nothing encompasses the majority of Noothgrush’s early material, sharing eight of the same songs. Die-hard fans of the band may wish that their cover of “The Imperial March” was represented in all it’s live fury here but for newcomers (and they are presumably who this record is aimed at) it serves as a concise introduction to a band whose material has rarely been collected in one place.

More importantly this record captures the band at their live best. These recordings were made soon after many of the songs were recorded and released so these hateful, slow, bilious performances feel like they are being freshly spewed onto the tape reels. Kicking off the collection in brutal fashion is “Sith” and immediately newcomers should be able to identify Noothgrush’s extremely subtle ear for a sludgey guitar melody, a facet that distinguishes them from many of their contemporaries and aspects of which you can hear in the bands that were subsequently inspired by them (Cough and Unearthly Trance for example). It probably won’t take too long for you to pick up on their Star Wars obsession too.

To Noothgrush’s credit they managed to keep these two set-lists fresh and varied. On paper, an eighteen song sludge compilation could be an arduous thing to sit through, particularly if you are not familiar with the band in question or the genre, but although Noothgrush’s songs are slow, for the most part they are relatively short and songs like “Derrell’s Porno Song” fall more into the category of stoner rock giving listeners a moment to groove along before returning to a Neanderthal head nod. Another point of interest is the band’s awesome cover of Celtic Frost’s “Procreation (Of the Wicked)”, giving Sepultura a run for their money in the cover-version stakes. “Hatred for the Species” is simply a badass tune that should be playing in the collective subconscious of doom and sludge fans across the globe.

In this live setting the band also gets to demonstrate their sense of humour; after playing their 11-second song “Evazan” which consists of the lyrics “He doesn’t like you/ Sorry/ I don’t like you either”, Gary Niederhoff introduces their “other short song” before launching into the longest song here, the nine-minute behemoth “Erode the Person.” The song creeps along so slowly that you have time to make a cup of tea and research who “Evazan” is (yep, another minor Star Wars character) before the vocals kick in.

As is to be expected from recordings from college radio stations in the mid to late nineties, the sound quality isn’t as great as they would be if they were studio recordings – for example, Chiyo Nukaga’s drums are sadly low in the mix for the first session for KZSU in 1996 whereas in the latter session for KFJC the drums are more audible but at the expense of the guitar level. But nonetheless both sessions archive a legendary sludge group in all their live glory and ultimately this compilation may prove to be the closest many of us will ever get to hearing the band in a live capacity. For that reason alone this is an excellent collection that should be cherished.

It’s a shame that other commitments got in the way of Noothgrush’s progression because these recordings suggest a band that could have been as beloved and well-known as contemporaries like Eyehategod, Buzzov*en and Sleep had they kept ploughing on. But their up-and-down history just adds to the band’s wonky, sludgey charm. Thankfully the band seem to be active again with some festival slots already under their belts and a handful rumoured for the near future so it seems that, for now, the Noothgrush Saga continues… 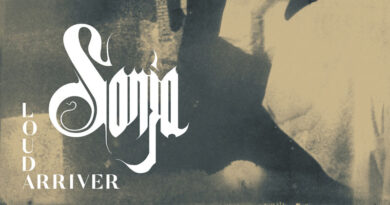