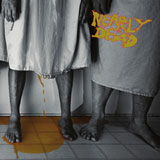 When we get our materials to review from The Sleeping Shaman, it’s usually a bio from the band or the label. Nearly Dead sent a simple request for someone to review their self-titled release. It’s refreshingly direct, leaving out all the hyperbole sometimes lavished upon us by bands.

Nearly Dead play grinding noise rock. Opening track Hey Nurse is an odd collection of buzzing riffs, mechanical drumming and almost spoken word vocals with screeching saxophone type noises in the background. It’s a suitably unsettling piece, with the refrain “I want to live forever” repeating in a menacingly hypnotising way. Organs has that same vibe, a Killing Joke-esque industrial stomp with a preacher of darkness over the top. The wild brass instrumentation is disconcerting, seeming at once totally out of place and yet integral to the feeling of weirdness.

Cialis is a grinding, dissonant nightmare full of howling jazz and provocative imagery. Oxycodone opens with the line “blood is dripping from my penis”. Yes, really. This is dark, twisted shit, wrapped within a jaggy, hypnotising atmosphere of distortion. It matches rather well with the disturbing imagery of the front cover. Feeding is yet more midpaced, grinding menace.

That, however, is where Nearly Dead start to fall flat. Their songs don’t really vary in structure or substance, and while it definitely creates an uncomfortable atmosphere, it starts to become a bit tedious. It takes a full 6 tracks before a change in pace arrives, Pedal Error giving it a bit more drive. The addition of the brass instruments, while certainly a unique aspect and essential in creating that unsettling feeling, starts to be more distracting than pleasurable. It starts to become more of an ordeal, and maybe that’s the idea to an extent, but it’s not for me.

Nearly Dead is an intriguing record. It is certainly uniquely weird and I have never heard anything like it. But at the same time, it could do with a little more depth in the song writing. Repetitive riffing with random bursts of brass can only work for so long without developing the idea into something a bit more rounded. The vocal styling is cool, and the imagery is dark and provocative, however for me it starts to grate a bit as it goes on. If Nearly Dead can work this concept into some better individual songs, they will definitely be an interesting prospect.