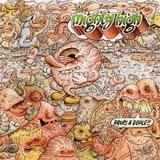 OK time for a quick bit of self realisation. Hands up who, for the most part, leads a fairly mundane existence? You know the type of thing; get up in the morning way too early, spend the best part of the day working a shitty job that’s a million miles away from the dreams you had for yourself then come home too tired and too fried by the bullshit machine to be bothered to do anything with your evenings. You earn enough to pay your rent/mortgage, your bills and food…etc but Friday night is annihilation time!!! Friday night comes, you have some cash in your pocket and it’s time to unwind, let loose, kick up some dust and for a few precious hours forget who you are. Mighty High are the musical equivalent of that Friday night buzz!!!

Rock and roll has always been about escapism, whether it’s the fantasy epics of the late and very great Ronnie James Dio, or the fuck fantasies of David Coverdale (or maybe there true stories!!!). At the other end of the scale we have the drug antics of Mighty High. Now I’m not going to comment on the moral implications of glorifying drugs but I will say that I wholeheartedly endorse the glorification of rock and roll in all its forms and the lifestyle that goes with it. In terms of attitude and especially the music, Mighty High are the epitome of rock and roll at its best.

Classing their sound as “Black Flag Railroad” these New York boys kick up a raucous blast of retrogressive punk and roll that evokes the spirit of MC5 pissing on Black Flag while Montrose jerk off in the corner. “Cable TV Eye” is a straight up head down rock and roll charge that takes the Stooges blueprint and fucks it up the ass with a pound of speed while the veins bulge on vocalist Woody’s forehead. Flip this sickly blue piece of plastic over and you get the “live” version of “Hands Up”. This is live in the same sense as Judas Priest’s “Unleashed In The East” and Thin Lizzy’s “Live And Dangerous” were completely live…unless the band really did get Jim Dandy from Black Oak Arkansas to introduce them at a gig and provide a mid song rant!!! Whatever, it’s another example of the High at their obnoxious, belligerent rock and roll best.

Mighty High don’t want to change the world…I suspect if Bono turned up at one of their gigs he’d be on the wrong end of a good kicking (someone please send him tickets!!!). What they want to do is entertain you, give you that much needed chance to turn off your brain and release the shit that piles up in an every day existence and for that reason alone, Mighty High are utterly and unequivocally essential!!! 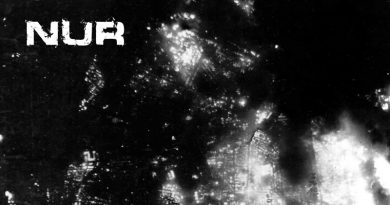