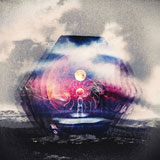 Messenger have a lot of cool things on their side: from their record sleeve to their famous supporters, they’ve built an incredible machine behind their new record. Rygg, of Ulver, says that you should expect big things from this record.

But whoever wrote their press release needs to have another look at what they’re saying. By casting Messenger amongst some sonic titans, the record that follows can either be a ‘hit’ or ‘miss’. Bands such as The Beatles (they sound nothing like the Beatles), Swans (these neither), Pink Floyd (a bit) and Ulver (they had to say that) appear in the glowing statement.

This statement could get a band into a lot of trouble, if further inspection was taken. Comparing a new group to an old one, especially such names as those, can only lead to trouble (believe me). The reason those bands are so important to so many people is because they’re so unique. They also happen to be completely divisive amongst music fans: The Beatles can change your life, or you can be put off by the immense rep they have. Same goes for Pink Floyd. Swans are a different kettle because they’re operating outside of the mainstream, and have made some of the most beautiful and aggressive music ever recorded, sometimes on the same record. Whether you love or hate any of these bands, chances are you know that they changed their sphere of music forever.

Unfortunately, there’s no danger of Messenger doing that. This record is not a White Album, or an Animals, or a Soundtracks for The Blind – there’s far too much of the same thing going on for me to recommend it for its variety or inventiveness. Simply put, it won’t change your life or perspective on music any time soon.

On the flip-side, and a positive note, I’d cast Messenger alongside Opeth, Porcupine Tree and others of that ilk, who use prog-rock as a springboard into unfathomable realms of sonic bliss. It’s as simple as that, folks.

The music, I’m glad to say, is good enough to merit repeat plays. ‘Illusory Blues’ opens with ‘The Return’, which starts with ‘Stairway to Heaven’-esque acoustic guitar plucking, beautiful vocals and thudding Bonzo drums, which gradually increase the pace and intensity of the track. Then something magic happens, around the four minute mark: the delicacy flies off south for winter, and a BIG FUCKING RIFF comes in, and whichever vocalist is singing (there are two in this group, an embarrassment of riches) suddenly turns into The Lizard King, his roaring vocal one of the most spine-tingling moments on any tune I’ve heard this year. It’s an all-too-brief glimpse of the most potent end of psychedelic music – passionate, rather than drowsy, powerful as opposed to sedate.

‘Piscean Tide’ follows, where delicate violin sounds and tender organ notes harmonise with glassy acoustic guitar to considerable effect. It’s progressive, folk-influenced music, and if those tags mean anything anymore then they mean exactly what you can hear on this track. Genuinely beguiling sounds carry it along on a ghostly wave of bucolic noir, its blissful whimsy tempered only by ominous drum thuds.

‘Dear Departure’ is reminiscent of Mikael Akerfeldt’s dense songwriting approach – a chiming acoustic guitar guides the track forward, joined at times by some more violins, minor-key harmonies, and intense drumming from Jaime Arellano. His heavy-handed tub-thumping is, paradoxically, tactful and thoughtful – and while his drum sound literally bangs your head for you, it suits the production and retro aesthetic perfectly. John Bonham did not die in vain then, he simply relinquished his drumstool and muscular rhythmic sensibilities to the ether, for bands like these to pay deference to.

Three of the remaining tracks adhere to Messenger’s dynamic formula: slowly built tension exploding into a (relatively) noisy coda. Those tracks are the already-released ‘Somniloquist’, closer ‘Let The Light In’ (featuring some fantastic atonal, shrieking violin) and the impeccably-named ‘The Perpetual Glow Of A Setting Sun’. This trio of tunes are made up of the same palette as the rest of the record, where Messenger construct a slow-burn, grandiose and progressive atmosphere that befits their vocal talents.

One track remains: Album highlight, and undoubtable centre-piece ‘Midnight’ follows up on the Zeppelin vibe of the first tune by going into full-throttle country-prog that shifts, unexpectedly, every few minutes. The first section sounds like Danzig at his calmest fronting Zeppelin at their mistiest, the second sound is built on a tight, rubbery groove, complete with Doctor Who sound effects (that’s a good thing!). This second section grows into a massive, hulking Opeth-style epic chugathon, occasionally taking a breather with violins and acoustic guitars coming to the fore.

It’s an always good, occasionally great album that features shards of a better sound (particularly the end of the first track, I urge you to check it out), and ideas that Messenger will no doubt build upon with their next releases. It’s not as radical or inventive as one might hope, and a lot of the ideas found here can be found on superior releases, but the band has time (and virtuoso musicians) on its side, and the potential here is limitless. Objectively, this is a grand release for fans of prog-rock. Subjectively, I constantly found myself wanting to give them a beer or ten, or a Colombian Cold – somebody somewhere can light the fuse in this band that will blow their contemporaries out of the water. I hope they do it, soon. (Somebody please lend them ‘Master of Reality’ or even ‘Electric Ladyland’ – it is possible to build light and shade into heavy, psychedelic capital-R Rock music.)

If Messenger drop the ghostly Americana for fiery psychedelia and end up becoming one of the most exciting bands in music today, I won’t tell you ‘I told you so’, but you’ll know I was right.