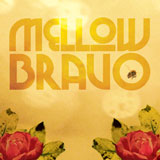 Goddamn!!! Us music journos don’t like being confused!!! We don’t like it when bands make us think about what we’re writing, we prefer to dismiss bands’ hard fought creations with glib epithets that give us more time to sit in our ivory towers snorting cocaine off of hookers’ asses!!! If we can’t make throwaway comparisons to bands like Kyuss, Black Sabbath, Metallica…etc then we don’t actually know what to do with ourselves. Bands like Boston’s Mellow Bravo are not our friends but fortunately for them, bands like Mellow Bravo are fucking awesome!!!

At their core, Mellow Bravo are a hard rocking, blues based rock and roll band but after the stomping, harmonica fuelled stomp ‘n’ crunch of opening track “Sad Sam” it becomes clear that these guys are far more than just a beer and sweat bar band as “Where The Bodies Lay” comes on like the dirty cousin of The Clash’s “London Calling” with a loose New wave meets reggae vibe in the verse topped off by vocalist Keith Pierce’s anguished, Henry Rollins meets someone who can actually sing, howl. To add a bit of spice, the fat chorus features the smoky female vocals of keyboard player Jess Collins that provides a welcome contrast to Pierce’s gruff tones…and continues to do so throughout the album.

Third song on and the third change of pace and style as “Ridin’” cruises on a kick ass, high energy, rocking stoner riff. Again Collins and Pierce’s voices blend perfectly and deliver a monster of a chorus. This is where Mellow Bravo show they can rock out with the best of them in no uncertain terms. There’s also something very appealing about hearing Collins singing “You know I want it all night”…doesn’t matter really what she wants, with a voice like that it’s just enough to know she wants it!!!

The band now give us time to mop the sweat from our brows as they drop the ballad “When I’m In Pain”. Don’t let that word ballad scare the shit out of you. This is a song rooted firmly in the blues and offers a distinct nod towards the world of 50’s doowop, albeit without the doowop bits!!! Again Collins shines on a big meaty chorus that would bring a smile to Janice Joplin’s lips. Pierce also shows that he is more than just a tortured throat as he delivers a performance dripping with raw emotion and attitude.

Just as you think you may be getting the measure of Mellow Bravo some gentle marimba (I think) kicks off the taught and funky crunch of “Lioness” that displays something of a pop like sensibility to the band’s sound without entirely sacrificing their muscle…the chorus is certainly brimful of fuzz and bluster. Here Pierce’s vocals come across like a mix of Chuck Ragan from Hot Water Music and Chuck Moseley from Faith No More, raw yet impassioned. The Faith No More comparison is further reinforced by Collins’ spectral keyboard flourishes.

So you want some country? Yep, Mellow Bravo can touch on that as the delicate strains of “Senorita” display some of the finest traits of the country ballad but thankfully steer clear of some of the worse clichés. This is more country by way of Lynyrd Skynyrd, particularly when the slide solo floats over some loose power chords. The chorus refrain of “I don’t need you, I want you” is simply beautiful, from the heart and delivered with real restraint by Pierce as a contrast to his usual bellow. By contrast, the subtly titled “Love Hammer” is a big assed beast of a song grooving on a fat riff and peppered with some more tasty slide to dip it into southern territory. This is a song tailor made for the live environment to kick a crowd into blind submission, particularly when Collins duets in a call-and-response style with the slide during the middle eight…this is the kind of thing Skynyrd would draw out to 20 minutes onstage in the 70’s!!!

From its title, “Shake Shake Shake” sounds as though it should be a dance floor filling rave up but is, in fact a tight little pop rocker with a chorus designed to head straight for the darkest recesses of the memory and stay there. Oddly enough the Hot Water Music comparisons here go a little further than merely Pierce’s vocals as this is the kind of tune that they excelled in writing in their latter days. Another song and yet another turn on a sixpence as “Prairie Dog” starts as a sweet little down home, twilight-on-the-porch acoustic country duet between Pierce and Collins before the band stop chewing straw and join in with something that’s as pure country as these guys are likely to get…not unlike The Supersuckers’ forays into the genre.

It seems the country road ends in a dead end so the band head further into pop meets hard rock on “Leave When You Please” which delves into Van Halen’s more commercial 80’s output, or maybe Foreigner’s harder leanings as it rolls along on some tasty Fender Rhodes piano and a chorus that is more than just radio friendly, it wants to marry the radio and produce beautiful babies with it!!! Big haired rock chicks will dig this song and muscle shirted pissed up meatheads will dig the big haired rock chicks digging this song!!! It seems the band have made a fleeting visit to 80’s LA and end the album taking the country road once more as “Big Block” is a folky acoustic country romp that threatens to break into a barn dancing stomp but stays true to its mellow heart to end the album on a beautiful and restrained note.

I will admit, on first listen I was hit with a big dose of “what the fuck” as I tried to make sense of the Mellow Bravo sound but repeated listens unfold the magnificent strength of the band’s song writing and reveal the sheer emotional content of the album. Yeah that’s right, emotion…don’t be scared of it as this is a very human album that runs the gamut of the human psyche from loss to celebration. It’s an unusual album for Small Stone, though their bio suggests that it will be released on the new Mad Oak imprint. It is, however, a slow burner that may confound on first listen, only to grow in strength with each listen thereafter and may actually prove to be the best album the label release this year.