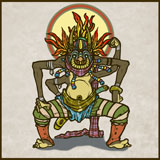 Maeth are, a relatively new band from a small town in Minnesota with cool artwork and a great sense of humor. As for a genre, their debut EP called “Horse Funeral”, released on on August 3rd this year for free, is hard to describe.

Imagine Sludge, mixed with 60ies rock, psychedelic music and prog, and you still would be missing aspects, like some middle-eastern sounding passages, southern-rock riffs or break-beat like drum-parts. For those of you, who were put off by the progressive part, let me assure that there is no technical wanking or choppy played rhythms that become uncomfortable after a few repetitions on this EP. It is more of a King Crimsonesque and Pink Floydish vibe I feel, especially the Crimson King’s “Larks’ Tongues in Aspic” atmosphere.

The 5-title EP kicks off with the title track “Horse Funeral”, starting with some wind sounds and feedback like guitar noises, being followed by heavy mid tempo grooves and a tasty melody above them. It all starts becoming “proggier” with time, reaching a semi-djenty harmonized passage, which is followed by a surprisingly mellow and jazzy part involving a clean guitar and sporadically used drums. And after a small build up a flute floats above the other instruments, solos tastefully and masterfully ornamented, until the others cease playing. The track ends with a few ornaments on the flute.

The follow up, “Ganges” seamlessly starts, where “Horse Funeral” ended, with the flute continuing to solo, being “escorted” by the bass. I do not want to say “accompanied”, for the bass part here is a bit more independent. With a bass played first in the low registers, with chords and repeating motifs of droning notes, evolving into melodic motifs played on the higher registers, with a boost in the high-mid and treble frequency range, and an atmospheric element (here the flute hovering above the bass) as well as hand percussion (a darabuka, if I’m not mistaken) this track reminds me of Om. But, it has more; more guts, more power. Om on steroids.

Before the percussion kicks in, overtones played on the guitar appear, being used strategically, giving the track more depth and a different feel. In every repetition here, there are minor variations, making it even more hypnotic. After a while, the percussion is replaced by a drum set whilst the until now overtone-playing guitar becomes more intensive and starts taking over the lead-instrument’s position, while another guitar arpeggiates in the background. After some changes in the guitars, one starts soloing, this time with a bit of overdrive, while the whole track intensifies again, just to become mellower after the solo again. Bigger ups, smaller downs, almost black metalesque tremolo guitar picking, Ebow passages and really heavy riffing follow. This track can be described best with four words; extremely versatile and awesome.

Next, “Wytches” begins with palm-muted heavy riffage, becomes groovier and more melodic. Then tasty slow soling with shred-like speed bursts, a short black metal like passage, followed by growling vocals accompanied by semi-djenty, proggy guitars and drums, a short melody above those and again heavy rhythms, after which comes a short drums solo fading into noise. The heaviest track on this for me. And it is not heavy because of volume or ridiculous amounts of distortion, but because of the groove Maeth establish here.

The 4th track really surprised me; after a spoken word passage I did not understand, a mellow and warm acoustic guitar track begins. Rhythmically interesting fingerstyle playing with a southern rock feel. “Haint” picks up speed and gets faster and faster, showing the great mastery – for playing something like this at this tempo in the right rhythm and without noises is quite a challenge, yet, if I was given the chance to change one think about the EP, it would be making this track longer.

The final composition, “Green to White” opens up with a clean guitar playing the main riff, which is then harmonized with distorted guitars and supported by drums. The track becomes more mellow and develops a southern-rock vibe, getting heavier with time, adding harmonized leads again, followed by an old-school doom metal riff, punk-like rhythms and an 80’s like shred solo above them just before the doom riff returns and ends with a harmonized southern riff fading out.

In conclusion I can say, that this EP will be in my top 5 of 2012 releases at least. It is extremely versatile, really groovy, dynamic, original, arranged cleverly and played masterfully. All band members play together in a way, only very good musicians do after having jammed together for ages.

The unisono-passages could not be tighter (even fast ornamentations are synchronized), the changes in band-dynamics and tempo are perfectly executed, and every band-member plays great individually. The solos are all tasteful, every note is well placed while there are subtle variations keeping the accompaniment interesting.

Production wise I cannot think of anything that could have been made better. The distorted guitars and bass sound fat, yet not muddy or too bassy, tight but not too overcompressed and are panned brilliantly. The acoustic guitars, despite being steel string, sound warm, the electric guitars, although having fuzz or distortion most of the time do not sound oversaturated as it is too often.

I am really looking forward to future releases by Maeth and I hope to soon be holding a physical full album release in my hands. 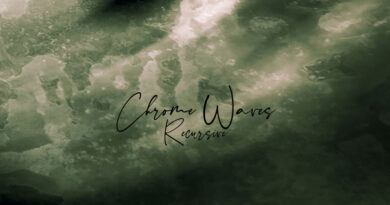